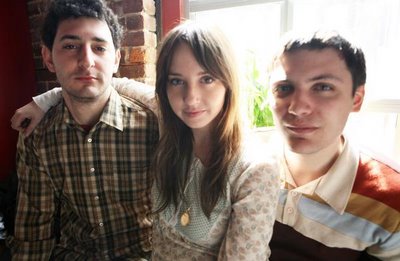 Don't let the name fool you, The Muggabears aren't creating cute, cuddly pop tunes. (In fact, their songs are peppered with profanities...gasp!) The trio has been garnering attention over the past year for their sound -- something akin to a lo-fi love affair with noise rock. They're not short on comparisons to Sonic Youth and Pavement, so if you like what you hear -- come catch 'em live tonight when they play Galapagos.

How did the band name come about?
I saw these huge stuffed bears at FAO Schwarz a long time ago and said out loud "I'd love to play and sing with those Muggabears." And then said "That's a good name for a band." I'm not sure I still agree!

How did the 3 of you meet, and when did you settle into the lineup that you have today?
Emily and I met in school in Oklahoma and moved to New York about 6 months apart from each other. We actually really recently met Gabi, via Craigslist of all places...it's been super productive. We could tell it was going to be when we first played with him and had jams that actually worked really well. Before Gabi we'd try and jam and it would almost never worked for some reason. So that's when we settled.

Do you think you'll ever get sick of hearing your band being compared to Sonic Youth? Do you agree with the comparison?
I guess we're already a little sick of it though I think we agree with the comparison to various extents. They're definitely one of the bands we like a lot. It's a little frustrating though when you do something noisy and people immediately think "Sonic Youth!"...It's unfair to all these other great bands before and after and contemporary with Sonic Youth who've used noise as some kind of element of composure. Hendrix is a super obvious example. My favorite band is and probably always will be the Beatles who to me are noisier than Sonic Youth.

Have you had any unusual experiences playing a show in New York?
Most unusual would probably be the time I passed out in the middle of a song at Union Hall. I screamed until I ran out of air on our song "Dead Kid Kicks". By the time I realized I should stop screaming (my head started hurting really bad) I was crashing into the monitor. The band kept going though! It was pretty strange.

Do you have a favorite venue to play here?
Would probably be easier to pick a least favorite, but I really like Cake Shop a lot. I like the way that I feel like I'm playing in the basement of a house when we play there. It's kind of the last of its kind in Manhattan. And on top of that they have a pretty decent little record shop upstairs. That's their total coup.

If you could play any venue in New York, with any New York musicians in the lineup (dead or alive) -- what would that show be?
Probably White Columns, which I'm pretty sure hasn't had shows in years with Mars (one of the best NYC bands ever), Swans, Charles Mingus and Ornette Coleman being forced to share a stage at the same time, and Velvet Underground somehow playing their first show ever.

Please share your strangest "only in New York" story.
That would probably be the time I had gotten about two hours of sleep before getting on the subway for work. It was really packed and I was pushed up really closely with this guy which I didn't really think much of...until I noticed he was smiling at me and rubbing his hand up and down on my crotch. But it was so packed that I couldn't really move away from him and I'm fairly timid about stuff like that I guess...plus it felt like a dream because of the lack of sleep. I somehow managed to move my pelvis back an inch or two to let him know I was not game.

Which New Yorker do you most admire?
Lately, maybe Matt Conboy of this band Sisters. He's kinda doing stuff on an organizational level that I wish I could do. Maybe I could. But yeah, him.

Given the opportunity, how would you change New York?
Besides the obvious "make it cheaper to live here," I'd go with (and I suppose this is totally interrelated with the cost of living here) having it be a little easier to meet people that you could be really good friends with. I feel like all my friends here are from my day job or play music. There's nothing much in between those two opposites and I don't much know how to fix that.

Under what circumstance have you thought about leaving New York?
If good music/venues truly dried up here, I can't think of too much of a reason to stay. It would be absurd to pay this much to hang out with bankers and check stuff off in Zagat. Fortunately there are at least a handful of both still.

Can you please recommend a good weekend hang-out that isn't unbearably mobbed?
Goodbye Blue Monday, on Broadway, off the JMZ in Bushwick. One of the venues I'm thinking of...it's a really awesome place to just go and find out what bands are playing when you get there, just to see a show. And the place itself is truly amazing. You'll know why if you ever go, but there's nothing like it anywhere else in the city that I've seen. You could spend hours just looking around, whether there were bands or not.

What's your current soundtrack to the city?
I've never had an Ipod to literally soundtrack the city with, but I sometimes imagine it with something like Lush Life by Coltrane. Side two especially.

Best cheap eat in the city.
Senor Taco's on Broadway in Williamsburg, right off the Marcy stop on the JMZ. Really good tacos and really really cheap. $5 will fill you up there.