Like a dysfunctional democracy running on fumes in the year 2018, our subway is a complex system with myriad antiquated moving parts that probably should have been replaced years ago. The fact that it even works at all, and that most of the 5.6 million daily rides unfold without incident, is still a modern miracle, and we should all take a moment to appreciate the hard work done by transit workers to keep things moving despite all the crumbling infrastructure.

Having said that, there are moments that perfectly encapsulate the MTA's seemingly limitless capacity for snafu. And one such moment occurred on Wednesday this week, when straphanger Josh Boerman spotted a transit worker finishing up putting a fresh coat of yellow paint on the edge of the Rockaway Ave C train station in Bed-Stuy. "I was a bit baffled as to what I was seeing, so I bent down and touched the paint to see if perhaps it was at least tacky," he told us. "But it was completely wet and at that point I was like, 'Oh this is gonna be good.'"

someone just put down a fresh coat of yellow paint on the subway platform edge....... at 9:30 on a wednesday morning. this platform is going to be a mess of yellow footprints by the end of the day. what is going on pic.twitter.com/4SQa27HoCh

"Everyone else on the platform was doing that passive confusion/resignation thing that is now endemic to how we treat our experience on the subway these days," said Boerman, a theater director and designer, who was on his way to work in Manhattan. "We have kind of accepted the absurdity as our lot in life." 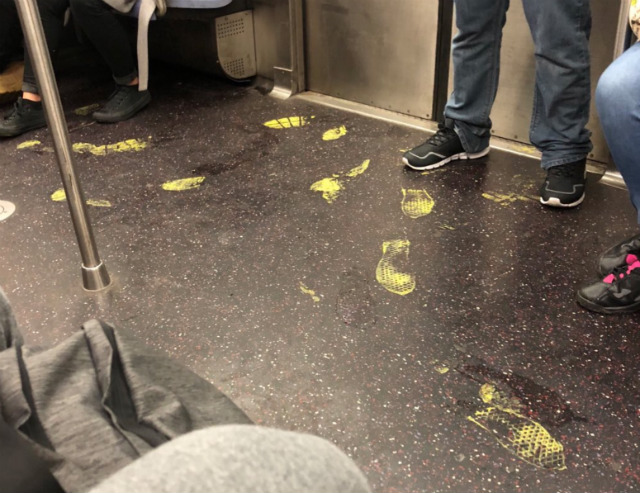 "I very nearly stepped onto the strip as I boarded the train, even with the full knowledge that it was wet," Boerman said. He wasn't surprised that people tracked it into the car: "By the time they noticed, it was too late and they didn't want to draw attention to it. Kind of like when you step in dogshit."

The painting wasn't just taking place at Rockaway Ave. that morning—Boerman also spotted it being done at Ralph Ave., the next stop on the line. They had ensured that even more work would be necessary to clean up the mess.

I think I'm on this train right now! pic.twitter.com/NJe7C06HRB

There are indeed yellow footprints on my subway. #cuomosmta pic.twitter.com/h4wAw2GnuS

Boerman is resigned to the idea the MTA would schedule this kind of maintenance work in the middle of the rush hour commute on a weekday—let alone a soggy morning during which there already had been several delays on various lines. He saw the whole incident as a metaphor for the MTA's mismanagement.

I think the most unfortunate thing is that I wasn't really surprised. The MTA, especially the subway and particularly post-Sandy, has been characterized by a culture of abdicating responsibility. When you've got a governor at the head of the organization who's happy to pilfer money from the transit authority to fund upstate ski resorts, it naturally follows that you'll see similar mismanagement on down the chain of command

There's this complete institutional inability to see how decisions made will have future effects. In this case, the hundreds of dollars that the MTA presumably saved by choosing to not pay late night/early morning wages to their workers will now be handily eclipsed by the thousands of dollars they'll need to pay to scrub dozens, possibly hundreds, of paint-stained subway car floors

Whereas if people were encouraged to take responsibility, someone along the line might have said, 'hey, maybe let's not lay down fresh paint during rush hour.' Take this one anecdote, write it large, and it's not hard to see how we're left with a subway underfunded by billions, running on half-century old rolling stock that is constantly breaking down.

It remains a mystery why the platform was painted at this time. We reached out to the MTA for comment, and will update if they respond.

#c train
#MTA
#paint
#rockaway avenue
#subway
#train
#yellow footprints
#original
#we the commuters
Do you know the scoop? Comment below or Send us a Tip