Let's get the famous name out of the way first: One of world's biggest and most important collections of Bob Dylan memorabilia can be found in a small apartment in the West Village. Dylan fanzines, Dylan comic books, Dylan videos. Dylan playing cards, postage stamps, and bookmarks. Two of the three numerals from the house number on the door of Dylan's first Manhattan apartment building. (Someone else got the third one.) "There's this book called The Dylanologists," says Mitch Blank, the apartment's resident. "I'm Chapter Three."

Blank has parlayed this personal obsession into a professional role by becoming an associate archivist for the Bob Dylan Center, which is set to open in Tulsa, Oklahoma, in 2021 (and where he'll soon be donating most of his Dylan materials). But a visit to the apartment where Blank has lived since 1986 makes it clear that the Dylan stuff is just a small component—and arguably the least interesting component—of a lifetime spent assembling all sorts of oddball collections.

"More people are collectors than you realize, but it's a private thing for a lot of them," says Blank. "They don't want to reveal what they collect, because it's a window into their soul."

Blank himself has no such inhibitions. With an endearingly impish manner and the near-nonstop beatnik patois of a classic New York character, he enjoys showing off the many eccentric collections crammed into his 900-square-foot apartment. And if those collections offer a window into his soul, it would be fair to say that the view through that window is fairly crowded.

Blank specializes in what he calls "micro-collections," small, curated groupings that don't take up much space. They're all over his home: a little display of cartoon-illustrated pocket knives here, a display of cigar bands featuring the Statue of LIberty there, assorted doodads and whatsits all over the place.

Blank isn't unique in this regard. Lots of collectors out there share his fascination with the detritus of popular culture. What sets Blank apart, aside from the Dylan connection, is that he's unusually self-aware and articulate—not just about his collections but about the phenomenon of collecting itself.

"With collecting, you try to re-create a safer, more comforting environment where you were surrounded by the things that made you feel protected," he says. "That could be anything, for anyone."

For Blank, that includes some totems from his youth growing up in various parts of Brooklyn, Queens, and Manhattan, which is when he first got bitten by the collecting bug. "My father was a stamp collector," he says. "So you become aware that people do this, they collect. But as a kid, you don't have any notions about preserving history or anything like that. You had baseball cards because you <i>needed</i> them. They were power; they were currency in your peer group."

Many decades later, Blank still has some of his childhood collections—comic books, Superman figurines, sci-fi trading cards, toy dinosaurs. Standard kids' stuff. But his best micro-collections are the ones he's amassed as an adult, often representing categories that nobody but him would even recognize as collectibles. In doing so, he's essentially turned collecting into an expressive art form. 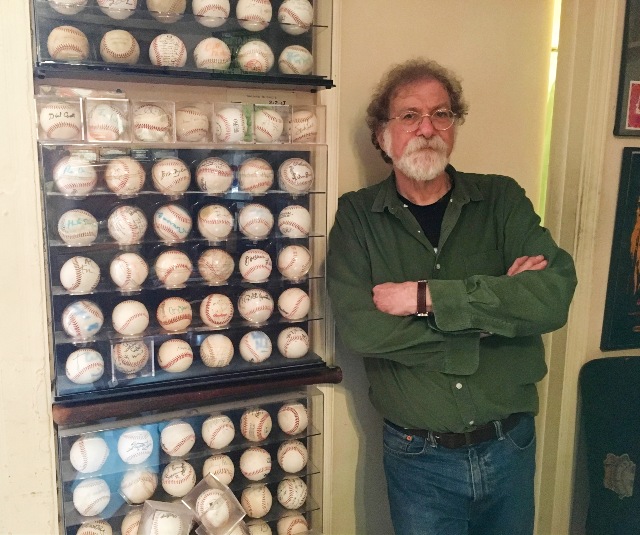 Blank and his baseballs. (Paul Lukas)

"Here, look at this," he says, showing off a display of metal museum-admission tags. "Every one of those was found on the streets of Manhattan. Never taken from a museum—they have to be found on the street." Why? "That's the rule!" he says, as if it were self-explanatory. Then he adds, "A lot of them are scuffed and scratched—I just love that." And suddenly it is self-explanatory: Each discarded tag is a story, an untold tale of someone who partook of New York's museum culture, and Blank clearly gets a contact high from assembling those stories under a glass frame.

Moving on, Blank points to a case of plastic gizmos recognizable as 45-rpm record adapters. "That is the world's largest collection of 45 adapters," he declares. "There are no two alike in here! They're from all over the world. I have thousands more around the house, but the ones here are all different."

How does he know his collection is the world's largest? "I don't know," he happily concedes. "But if anyone has more, let's see it!"

This mix of bravado and playfulness is among Blank's more infectious traits. At one point he shows off a piece of wood that he says is from a piano once played by Richard Manuel of the Band. "People come from all over the planet to see that,” he says. "They all want a little piece of it, like a screw, so I let ’em have a screw. As soon as they leave, I put in another screw.”

Moving to another room, Blank presents a wall of autographed baseballs, each signed by a non-athlete celebrity—Ray Davies, Lou Reed, actors from The Sopranos, Bette Midler, Donovan, Spike Lee, Robert Hunter, and many more. "Most of them lived or worked in my neighborhood at some point," he says. "I'd run into them, and I always carry a baseball with me. Sometimes they'll say, 'I'm not a baseball player, why would you want me to sign that?' But they do it." It's an ingenious project.

Even more satisfying, at least on a conceptual level, is a bookshelf with 17 copies of the same book—a 1935 exploitation tome called The Secret Museum of Mankind—each with a slightly different cover. Blank pulls one off the shelf and flips through the pages, which show photos of assorted indigenous people from around the world, many of them unclothed. "It was sort of like National Geographic," he explains.

But why so many copies? "Because the covers are all slightly different," he says, matter-of-factly. "I rest my case!"

On and on it goes—political buttons, Beatles music boxes, old packs of condoms, Jew's harps. It would be easy to dismiss Blank as a hoarder, but that would be both unfair and inaccurate. For one thing, his collecting shows a good method-to-madness ratio. For another, hoarders tend to be insular and secretive about what they've amassed, while Blank loves playing show-and-tell.

Blank doesn't buy much stuff anymore, in part because friends who know his tastes tend to give him things ("They like to think they're helping"), and also because he's run out of space. But he still enjoys the fun of the hunt, so he sometimes functions as a sort of freelance collector-for-hire.

"My attitude is, let me obsess for you," he says. "When I'm traveling, I'll take my friends' lists of whatever they collect, and I'll shop for them, because I still get satisfaction from putting the universe in order."

The biggest challenge to that universal order for any collector is knowing when it's time to let go. Blank will soon have to confront that as he transfers his Dylan holdings to the Tulsa facility.

"It's my life's work, so there will definitely be some painful separation anxiety," he says. "But I'd rather make a decision while I'm still able to, because I've seen what happens when someone waits too long, and then family or other people become the executors of their world, and much of the stuff goes curbside and ends up in oblivion."

On the plus side, the departure of the Dylan materials will create some room for new items. What will those be? "I'm not sure," he says. "But I like surrounding myself with stuff that makes me feel comfortable, stuff that feels like old friends. There's always room for more of that."

Are you a New Yorker with an interesting collection, or do you know of such a person? If so, we'd like to hear from you. Contact Collection Agency here. Thanks.

#bob dylan
#collecting
#west village
#original
Do you know the scoop? Comment below or Send us a Tip