The Met Is Being Sued Over Deceptive Admission Fee Signs

To gain entrance into the Metropolitan Museum of Art all you need to do is walk in... dime-less, even. But if you don't know that, and you miss the discreet text at the bottom of the admission prices sign that tells you admission is only "recommended," then you'll probably end up coughing up $12 to $25. And for what?! To see some stupid priceless masterpieces hung in some dumb gorgeous landmarked building?

Fed up with the museum's sly way of trying to get money for what they provide, three visitors have filed a lawsuit. According to the Daily News, Filip Saska and Tomas Nadrchal of the Czech Republic, and Stephen Michelman of Manhattan, say the museum "engages in an intentional campaign of misdirection that includes misleading signage and fraudulent marketing." The website also has deceiving language: 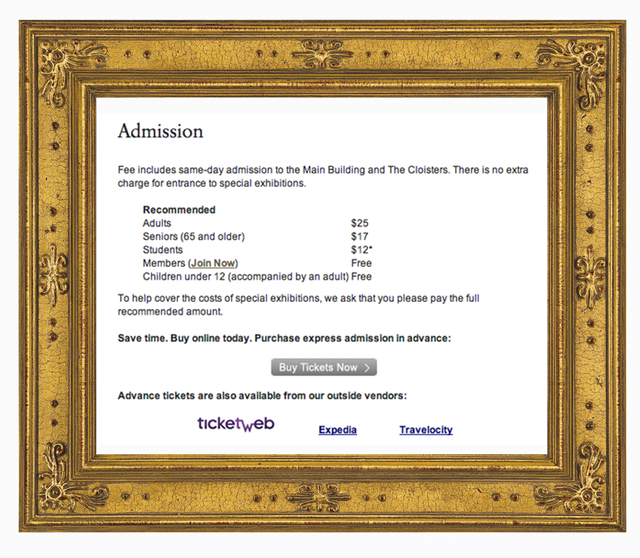 The fine "recommended" print on the signage is at the center of the lawsuit, and their lawyer Michael Hiller says, “We have obtained evidence which makes clear to us that the museum is actively misleading the public and that members of museum’s leadership are fully aware of that fact." Museum spokesman Harold Holzer notes that this is the “second attempt for publicity around the same baseless lawsuit that was filed a few months ago.”

According to the NY Times, "The museum’s original lease with the city specified that it had to be accessible free of charge several days of the week, but the museum says that changes in city policy in the 1970s allowed it to institute a voluntary admission fee.)"

#admission
#fees
#lawsuit
#metropolitan museum of art
#the met
Do you know the scoop? Comment below or Send us a Tip