The Long And Winding Road To How I Met Your Mother 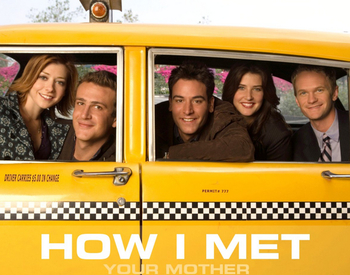 Here are some real things that are in my inbox from 2005 and 2006, included in exchanges between myself and several friends:

There was an intense love for How I Met Your Mother (and charades) that year amongst a small group of my friends, and we watched the show together whenever possible. It's almost like we were that little gang on the show, just a bunch of twenty-somethings in the city creating a lifetime's worth of inside jokes, bonding! But then, as the show went on and on and on, so did everyone's lives. These days I barely see any of those friends anymore, but I still watch How I Met Your Mother every week. Alone. Charadesless. Friendless. Hahahah jk, I still play charades. Alone. Friendless.

And with more whiskey these days.

But even if I relate more to loner Lenny now and less to a unique member of an adorable group of friends... I'm a completist, and this show has a great cast, and I need to know who the mother is going to be, and I don't really have much else going on Mondays, and honestly I kind of thought that all those friends were still watching, too... somewhere out there.

Recently I went to a National show, and when the lights came up I realized that the person who had been standing within one inch of me was "Ted Mosby." We had a brief conversation because he loves a band I used to work with. So I reached out to one of my HIMYM friends about it afterwards, and was told, "I'm embarrassed to say I haven't watched in like 2 years. Every once in a while I hear there's a great ep."

"That's cool whatever I have a lot going on too it's not like it was a big deal just thought I'd let you know. Also isn't charades and pie the worst? Can't believe we used to be into that stuff."

So one thing hasn't changed in the eight years since the show first aired: they still haven't revealed who the mother is.

But last night the show finally pulled the curtain back on the only New Yorker to hold on to the same umbrella for years and years, and showed us (me? Is it just me now?) the girl behind the yellow umbrella, the girl Ted marries.

If you click play below and watch the scene on your laptop with headphones on in your dark studio apartment, alone, and then barely react and just turn your laptop off and go to sleep at a reasonable hour, you'll basically have the same experience I did watching it.

Turns out it was more about the journey than the destination.

Alan Sepinwall notes in his morning-after thoughts that the 9th and final season of the show won't get us too far in to Ted and umbrella girls life together—the show's creator Carter Bays says, "Our ninth season will tell the epic story of the longest wedding weekend ever. We hope you like it. Next stop, Farhampton." This is where the characters are headed "now," for Barney and Robin's wedding.

#himym
#how i met your mother
#television
#tv
#original
Do you know the scoop? Comment below or Send us a Tip