The Legend Of The Most Dangerous "Action Park"

If you lived in the Tri-State area in the 1980s or '90s, you at least saw a commercial for New Jersey's infamous Action Park. But did you ever dare go there? It was known by many as the most dangerous of all parks, one with little regard for safety and poorly designed rides. Like this waterslide with a full loop: 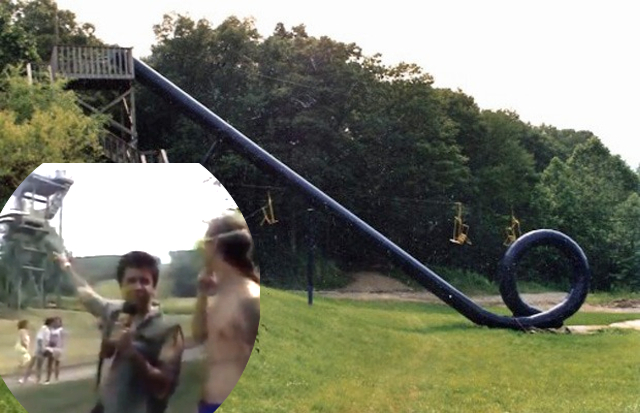 And the legend has grown throughout the years. As Mashable notes, "In the years since it closed down in 1996, Action Park has earned a reputation as the most insane—and possibly the most dangerous—amusement park that ever existed. A lawless land that was ruled by drunk teenage employees, frequented by even drunker teenage guests, and filled with rides that seemed to defy even the most basic notions of physics and common sense."

During their visit in 1993, even certain Alice In Chains members seemed stand-offish from certain rides—mentions of death and injury in this Headbanger's Ball segment are frequent.

In its Wikipedia entry, you'll find five subcategories under the "Factors contributing to the park's safety record" section, including ride design, employees, visitors, availability of alcohol on grounds, and lax regulatory climate. There is also an entire section regarding fatalities, of which there were six reported.

But as one survivor recalled, those who survived left with a life lesson: "Action Park made adults of a generation of Tri-State Area kids who strolled through its blood-stained gates, by teaching us the truth about life: it is not safe, you will get hurt a lot, and you'll ride all the way home burnt beyond belief."

Mashable recently teamed up with Daily Motion to revisit the legendary danger zone, and you can watch that here—son of Action Park founder Eugene Mulvihill says, "Every story that you hear, any legend that you hear about it—it's all true. This is a place that it actually happened."

#action park
#amusement park
#legend
#new jersey
Do you know the scoop? Comment below or Send us a Tip