Baseball season begins today, meaning we've got at least six months to root for the home team—until we get frustrated and breakdown. New York City is a baseball town, so you're going to want the basics to avoid awkward bar interactions like, "Hey what's the score of the ball match?" We'll take you through the start of the season's top story lines, introduce a few new faces, and give you other tidbits that will help make the season more interesting—even if you think baseball is boring.

Alex Rodriguez returns this season after facing a season-long suspension for using performance enhancing drugs. He is always the most interesting player in the Yankees universe because the guy is a walking, talking headline generator. He literally can't help himself. I like to think of A-Rod as the CBS comedy of baseball players: he puts up huge numbers and people are always watching, yet I can't find a single person who admits that they like him. At 40 years old (and no longer cheating, presumably), A-Rod's best days are certainly behind him. And yet, he's actually putting up decent numbers in spring training, so who knows? No matter how he plays, tracking the life and times of Alex Rodriguez is your conversation starter for all things Yankees.

Meet Sir Didi Gregorius. No, he's not the newest member of Khaleesi's Small Council or a Dornishman seeking revenge in King's Landing; he's the Yankees new 25-year-old shortstop, trying to fill the enormous shoes of retired Derek Jeter. Sir Didi was knighted in 2011 along with the rest of his team after winning an international baseball tournament for the Netherlands. Prior to joining the Yankees, Gregorius played a couple seasons for the Arizona Diamondbacks. He's no slugger, but he should be an excellent defensive shortstop. Succeeding Jeter is no small task, but if anyone is up to it, an actual knight is a good choice.

The Yankees have suffered a few years of mediocrity, as the "dynasty days" are long gone and with the departure of Derek Jeter, that chapter is officially closed. Even the most optimistic Yankees fan would tell you that championship expectations are delusional. The Yankees are a collection of aging, average to slightly above average players. The pitching could be good enough to keep them in contention, but they're going to need every lucky bounce to make the playoffs this year. But hey, at least they're having fun.

Baseball has something for everyone, so even if everything we've discussed up to this point means absolutely nothing to you, we can still find some way for baseball to hold your attention. We used to be able to convince my mother to watch games by having her pick out the most attractive player on the field that day; her baseball knowledge now consists of Ron Guidry's and Tino Martinez's butts. If this is a game you're going to play this season with the Yankees, check out newcomers Nathan Eovaldi and Garrett Jones. If that's not enough, there's always Nacho Helmet.

After missing all of 2014 due to elbow surgery, Mets Ace Matt Harvey makes his glorious return to Flushing this season. Despite not playing all season, Harvey had a knack for staying in the news, whether it was showing up in Page Six, attending Rangers games with supermodels, or flipping the bird from his hospital bed. The fact that he'll actually be playing baseball for the Mets this season, likely as their best player, makes him all the more interesting. If Harvey is at the top of his game, and it looks like he is, he'll contend for the Cy Young award as the National League's best pitcher, and could carry the Mets to their best season in years. Regardless of the Mets' team success, we can guarantee that Matt Harvey will not be able to interview New Yorkers about himself for Jimmy Fallon anymore without drawing a serious crowd.

David Wright is the Mets team captain, and arguably their best everyday player; problem is: David Wright was awful last season. The Mets need to score more runs this year, bottom line, and David Wright is fundamental to that. The Mets added Wright's good friend, and All-Star outfielder Michael Cuddyer (Kuh-DIE-Yer) this offseason to lighten the load on their star player. If a more comfortable Wright can have a bounce back year, many problems from last season will be solved.

This might finally be the "next season" Mets fans have been hoping was coming for 25 years. The Mets have one of the best starting rotations in all of baseball, and a lineup that has hit more home runs than any other team this spring training. The pitching will keep them in most games, so if the team can score runs like they have this spring, they're in position to win some more games this year. These are the Mets, so anything can happen, but it would not surprise many people to see the Mets make their first playoff appearance since 2006. 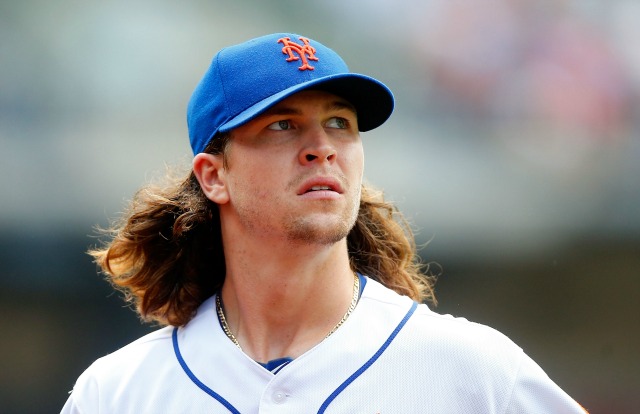 Who's The Dude With The Hair?

That would be Jacob de Grom, the Mets second best pitcher and the National League's Rookie of the Year in 2014. De Grom has a signature look that fans—and even Mr. Met—have tried to copy. If you're wondering what the odd #hairwego tag on Twitter is on Mets game days, now you know. Fun side bet: how long until Taran Killam portrays him on SNL?

John Maceda is a native New Yorker in a love/hate relationship with the Knicks and Jets.