The Knitting Factory to Relocate? 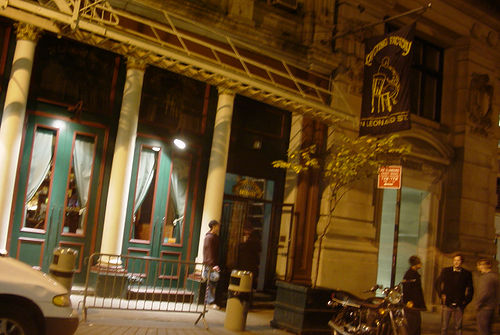 The rumor mill's in motion and word is that The Knitting Factory will be moving out of its long time home on Leonard Street. The news doesn't come as a surprise as last April brought word that the building the venue is housed in would be sold.

This will be the third location for the club, which started off at 48 East Houston Street some 20 years ago (it's been on Leonard Street for 14 of those years). So where to next? This community board calendar shows that earlier this month they applied for a "full liquor" license at 504-508 E 14th Street; they also mention a "preliminary discussion regarding zoning variance to permit large entertainment venue." With a little bit of time on their side, there are likely other options they're perusing as well.

Many music lovers would likely welcome a new location, as it stands The Knitting Factory isn't in an area that most of its patrons would normally find themselves. It'll be sad to see the longtime fixture leave its current spot though. Read the history of New York's Knitting Factory, written by owner Michael Dorf, here.