Someone didn't just make a Pizza Rat costume, someone made a Sexy Pizza Rat costume, which features "a soft, body-hugging grey mini dress." The costume was created right here in the United States of Idiocracy, and will cost $89.95 + shipping. Though it should be noted that for that price you will also get a "free panty." This is absolutely not what #PizzaRat stood for. This costume has not only stripped #PizzaRat of his dignity, but of his metaphorical meaning. 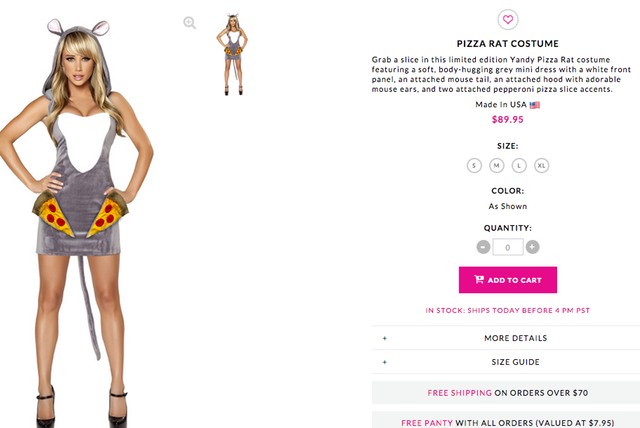 As you can see, absolutely no thought has been put into this Sexy Pizza Rat costume, which inaccurately features "adorable MOUSE ears," two slices of pepperoni, and zero tears of the many editors forced to generate several "articles" about a rat who once tried to eat discarded food in New York City. It's been weeks since #PizzaRat peaked, so there's been plenty of time to get this right, purveyor of sexy halloween costumes.

Instead of shelling out money for the above piece of garbage, we recommend buying this pizza pouch, placing a live rat inside along with a slice, strapping it around your neck for the night, and eventually falling drunk down the subway stairs. Like a real goddamn New Yorker. Like #PizzaRat. [via Esquire]

#costume
#halloween
#pizza rat
#sexy pizza rat
Do you know the scoop? Comment below or Send us a Tip