The "I'm Not A Plastic Bag" Craze Hits New York 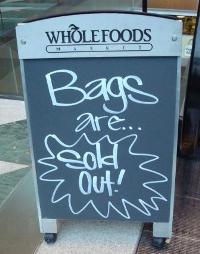 Yesterday we mentioned London designer Anya Hindmarch's I'm Not A Plastic Bag was finally arriving at Whole Foods today. The canvas tote was made popular by a combination of things including celebrity and unavailability. Hindmarch told the NY Times “To create awareness you have to create scarcity by producing a limited edition. I hate the idea of making the environment trendy, but you need to make it cool and then it becomes a habit.”

We're all for everyone using reusable bags, but why spend hundreds of dollars on this particular one? That's the going rate on eBay, where we're sure some New Yorkers will be making their rent money later (the retail price is $15). When the bags hit LA last month, LAist and TMZ reported from the front lines. Bags sold out there by 2pm, however here in New York at the Columbus Circle location (with 3,000 bags in stock) they were sold out in 29 minutes. Even in the morning downpour! The Ecorazzi also report that "a fight broke out on line as a woman pushed her way to the front, feeling she should have priority because she works for the NYC schools. Another woman is said to have fainted." 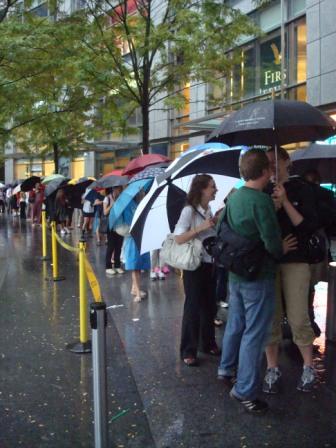 Of course, there are many options for reusable bags that can be obtained without violence: Trader Joe's sells a variety of reusable bags for a few bucks, and even rewards customers who use any reusable bag with a monthly lottery for free groceries. The website Reusable Bags has a ton of great eco-friendly options. And there's always the reactionary "I'm Not A Smug ____" imitation bag.

Whether you stand in line for 3 hours to get the next big "It" bag at Whole Foods or not, keep the facts about plastic bags in mind next time you're buying groceries. Over 380 billion plastic bags are consumed in the U.S. each year, they take about 500 years to degrade and less than 1% reuse them. Get the facts here, and then get your own canvas bag and "just say no" to plastic.

Update: Here's a video of the craziness.

Photos via Ecorazzi, by Melissa Rosenberg.