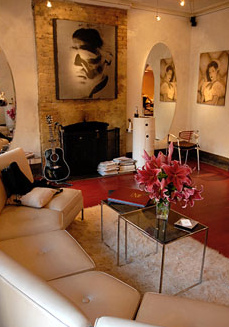 The Observer revisits The Hotel Chelsea in a piece about a long-time resident who runs a salon out of the building.

April Barton cuts hair out of Suite 303 in a salon that fits right in at the legendary building, and the cachet of running her business there isn't something she necessarily wants to give up. Recently, however, new management told her that she may be facing a massive rent hike.

An otherwise “gracious” representative of the hotel’s new management group personally informed her of the looming markup during a recent face-to-face chat.

“It was told to me that it would be a $30,000-a-month venture for me to continue my business in this space,” Ms. Barton said—a daunting sum even for someone who earns as much as $300 per haircut.

She has other ventures that may help her pay the bills though, and we're guessing someone who was once invited to join U2 on a worldwide tour (and declined) has a few tricks up her sleeves. If not, and her departure is one of many amongst residents, we're wondering where "the new Hotel Chelsea" will be...

#Chelsea
#hair
#hotel chelsea
#running
#The Hotel
#The Hotel Chelsea
#the observer
#u2
Do you know the scoop? Comment below or Send us a Tip