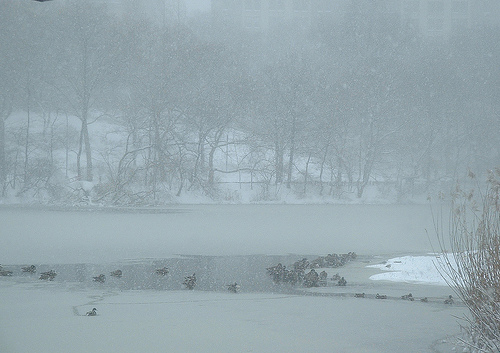 Have you re-read the classic coming-of-age JD Salinger novel, Catcher in the Rye, lately? amNewYork takes a trip down memory lane, and 5th Ave, with a pair of Holden Caulfield-tinted glasses. Apparently people like the Central Park Conservancy historian get a ton of inquiries about the New York references in the novel. The most popular question, "Where do the ducks go in the winter?" Referring to the ducks in the Central Park pond that our young Holden ponders.

"People are always calling and asking, 'Where do the ducks go?"' said Miller. "I say, 'Did you just finish reading 'Catcher in the Rye'? The answer is always yes."

AMNY has a D.I.Y. tour guide for those who want to trace the pre-emo character's mid-century steps: the Rockefeller Center skating rink, Radio City and the Rockettes, the zoo and carousel in Central Park, Grand Central, the American Museum of Natural History and the Metropolitan Museum of Art are the "crowd pleasers". Here's the more collegiate look at the aforementioned destinations.

Nothing a tourist doesn't usually hit on that list. So we suggest another classic novel tour: The Esther Greenwood Guide to Manhattan could start with a trip to Condé Nast and end at Bellevue (this will be almost as popular as Hannah Montana after Julia Stiles cinematically butchers the book). Any more ideas? Fitzgerald's The Beautiful and the Damned could lead to some Dantean fun, and an Atlas Shrugged tour could be popular with overprivileged, self-serving frat boys.

Ducks in the Central Park pond, in the winter, via Condour's Flickr.