Each morning, Donald rolls out of bed and checks StubHub. He's been scalping tickets on the street since Dwight Gooden was a rookie, but times are tough for hustlers. Competition from licensed brokers and online resale platforms is high, and street scalpers like Donald, once ubiquitous in front of the city's arenas and concert venues, are a dying breed.

"We're used car salesmen," he said. With a St. John's basketball game less than an hour from tip-off, cops shielded themselves from a brisk wind outside Madison Square Garden. They ignored Donald, who declined to give his last name for fear of being identified.

"We buy as cheap as possible and pray for a profit."

When StubHub came online in 2000, Donald still had his market cornered. He rotated between venues, a printed list of each night's events in his back pocket. After decades on the job, he had a veteran's sense of which game or concert had the highest demand. And like most scalpers, he worked alone.

"StubHub dominates the market now," he said. "Like, today's event was $17 online, so people coming out want to spend less than $17."

Donald was saving up, "making money local," so he could afford airfare and a ticket for the Super Bowl in Houston, where resold seats averaged just over $4000 on game day. The market for major events is where he still rakes it in.

"Super Bowl, we beat StubHub," he said. "But little events like this, StubHub beats us. There's more little events than big events, so StubHub comes out on top, regardless. It's killing us, man. The online shit, it's been killing us."

Donald works the lowest rung in an opaque secondary ticketing market that generates an estimated $8 billion in revenue each year. Pascal Courty, a professor of economics at the University of Victoria and an expert on scalping, has found that the size of this industry is all but assured by underpriced first-run tickets.

"The seller never tells you how many tickets are directly sold to the primary market," Courty said. "You need frenzy, so you announce a low ticket price. You get huge news, publicity, then you sell the tickets and create this big sense of scarcity."

A musician like Bruce Springsteen keeps his prices relatively affordable. His business is predicated on repeat customers. On a recent jaunt celebrating his 1980 album The River, his first in four years with the E Street Band, primo seats had a face value of $150. Yet by the time The Boss launched into "The Ties That Bind," many fans had paid more than five times that on the secondary market.

The second they went on sale, a majority of those original tickets were purchased by brokers. Using bot technology, these shadowy entities just as quickly listed their wares on resale sites like StubHub, SeatGeek, or TickPick with drastically marked-up prices.

"99 percent of our inventory is provided by professional brokers," said Jack Slingland, director of client relations at TickPick.

SeatGeek basically threw up its arms when asked how to trace who was selling what. "There is no way in our buying experience to tell who is selling the tickets," said Chris Leyden, a content analyst for the platform.

Bots are lightning fast and ruthlessly efficient, leaving even the most eager fans, those waiting at their computers with credit cards right when tickets go on sale, scrambling to secondary markets.

Meanwhile, street scalpers like Donald who, unable to shell out $25,000 for a resellers license in New York State, are left to monetize the crumbs. 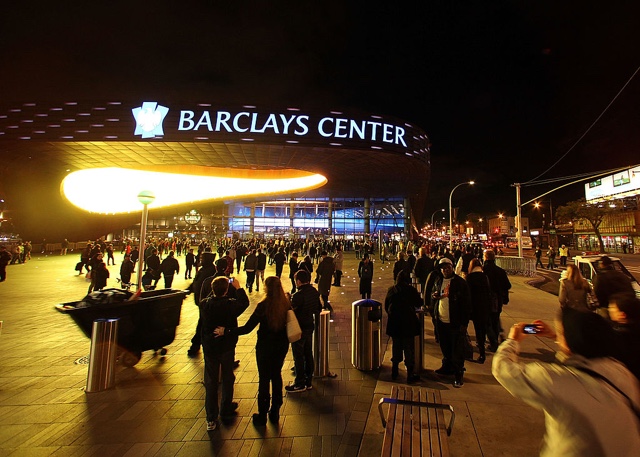 Before tipoff at a Nets game. (Alex Trautwig/Getty Images)

Michael, who like Donald wouldn't give his last name, routinely scalps tickets for Nets games at the Barclays Center. On game days, he checks in with a few brokers as it gets closer to tip-off, happy to bring their offerings to the street and split the take on any last-minute sales. Otherwise, he buys on site. Fans with extra tickets often unload to the first scalper who offers them a deal. Any deal.

"We offer better prices than the box office nine out of ten times," he said.

For the worst team in the NBA, the Nets had a healthy street market in the half hour before a late January game versus the Miami Heat. Twenty minutes before tip, Michael bought a ticket for five dollars. It sold, fifteen minutes after the game started, for ten.

Michael periodically huddled up with other scalpers to compare inventory, but mostly worked his turf alone. There were approximately 15 others posted near the arena's entrances, and they were careful not to step on each other's toes. NYPD vans lined the perimeter. Security guards were fanned out among the crowd, but they studiously looked away from any transactions.

"It's a violation, not a crime, most of the time," Michael said. "As long as you're not directly in front of the venue, it's usually not a problem. But you can get a summons. Sometimes, if they have warrants, people go to jail."

Scalping is illegal under state law if the seller is within 1,500 feet of a venue with over 5,000 seats. (It's 500 feet if the venue seats less than that—a figure that comes into play when reselling tickets to Broadway shows.) Until the state abandoned regulations in 2007—the year eBay purchased StubHub for $310 million—it was illegal to earn more than a 45 percent profit on a ticket sold in New York. Now, while the online broker can hoard tickets and sell as high as the market will allow, those on the street operate in a legal gray area at the mercy of police and city agencies.

He shook his head so wildly his hoodie began to slip. "You can't make no money 1,500 feet away. That's four blocks. I can't sell a ticket to the St. John's game on 37th Street! How can I make any money on that?" He pointed behind him. "This police detail says I'm cool. The next might say I ain't cool. There's 35,000 of these guys. I gotta deal with their attitudes, too."

Beyond convenience, fans prefer online marketplaces for their guarantees against fraud. If a broker sells a dud ticket on StubHub, the fan is refunded. On the street, there's a much higher chance of getting conned with no recourse. Scalpers are in the business of wish fulfillment. In the period before an event, as the crowd pushes toward its entrance, the ticketless fan often wants to attend so badly that he'll front the cash against his better judgment.

Ronnie, 36, spent $360 on tickets to see Dead and Company at Madison Square Garden this summer, only to discover at the gate that the Craigslist seller he’d dealt with had passed off counterfeits.

"They were printed on card stock and they looked very legit,” he told Gothamist. "It's funny because I think of myself as a skeptical person, but maybe I had to learn the hard way."

Ronnie had gone to see the concert with a friend and the friend’s father, who was visiting from Milwaukee. "Despair," he said he felt when they were turned away. The evening was ruined.

There's no way to know how many fraudulent tickets circulate because they come in hard-to-trace forms. The techniques used to counterfeit paper tickets have been perfected to the point where, other than a valid barcode, there is essentially no physical difference between a real and fake. Printed-out tickets, which are far more commonplace in the StubHub era, provide an even wider berth for fraud. A prevalent con finds a seller photocopying a legitimate ticket multiple times. He sells the real one first and then quickly unloads the dummy copies, which subsequently get rejected at the door because the original barcode has already been used.

Street resellers may have caught a break in December 2016, though, when President Obama signed the Better Online Ticket Sales Act, also known as the BOTS Act, a law designed to stop brokers from using automation to purchase large quantities of tickets. This means more primary tickets will go to regular fans, and, in turn, more one-offs from individual sellers will circulate in both online and street markets. Ticketmaster has estimated that, in recent years, nearly 60 percent of its most-desired tickets were purchased by bots. Yet many of the brokers deploying these rogue technologies are based overseas, beyond the jurisdiction of the Federal Trade Commission, which is responsible for the act's enforcement.

"For too long, brokers armed with illegal bots that instantly snatch up thousands of tickets have had an unfair advantage over the average New Yorker looking to attend their favorite sporting event or concert," NY Attorney General Eric Schneiderman, who backed the BOTS Act, told Gothamist. "Fewer bots will mean more tickets available for the ordinary consumer at more affordable prices."

Transparency and legality were recurring themes on the street. Scalpers expressed a desire to operate more openly. Most said that if, like in Tennessee, there were an affordable licensing procedure for their profession, they'd happily operate legitimately. They also said that if were no chance of arrest, they would be willing to guarantee their wares by escorting buyers to the door. Selective enforcement muddies the waters.

"You just gotta be able to adjust," said Michael. "It's like there's different details every year. If I walk you to the door and get a DAT"—a desk appearance ticket—"that's maybe $200 out of my pocket. It's too risky."

The crowd had thinned, and with nothing left to flip, Michael inched closer to the Atlantic Avenue subway entrance. "Anybody selling?" he asked no one in particular. It was nearing the second quarter, and the Nets were well on the way to their 39th loss in 45 games. For Michael, the game was already over. He went down the stairs, back underground, another night at the office making five bucks at a time.

Carter Maness is a freelance writer based in New York. He frequently writes about the relationship between technology and labor.

#brooklyn nets
#scalpers
#tickets
#longform
#original
Do you know the scoop? Comment below or Send us a Tip