Auction house to the elite, Sotheby's, has teamed up with that place where you buy tiny little spoons with state mottos emblazoned on them, or whatever your Thing is. Anyway, we're talking about eBay. Sotheby's and eBay, together at last. SotheBay's. Thanks to this alliance, some pretty interesting stuff is coming to the online auction platform—nothing any of us can afford, but it's always free to look!

Their auctions go live tomorrow, and there's an entire New York-themed lot. Below are some of the more intriguing items going on the block, should you find yourself flush with cash and with room for a small vehicle in your apartment...

"The cart is in drivable condition... A fantastic example of whimsical Major League Baseball marketing from the late 1960s, used intermittently at Shea Stadium for more than 20 years. Highlights of its use include a memorable appearance at the 1986 World Series versus the Boston Red Sox and then again in 2003 when Mets Captain John Franco drove Mets legend Tug McGraw onto the field as part of the team's celebration of the legendary 1973 team. Immortalized by its dramatic appearance at the monumental 1986 World Series Championship in which it entered the field of play following the culmination of the Game Seven win, it promptly ran out of power adding further delight to the victory celebration."

Note: The Yankees also have an offering: their old sign—but as with everything with the Yankees, it's a lot more expensive (expected to go for $600,000!).

NYC TRANSIT AUTHORITY GRAPHICS STANDARDS MANUAL
Starting at $2,400, this item is expected to go for around $7,000. 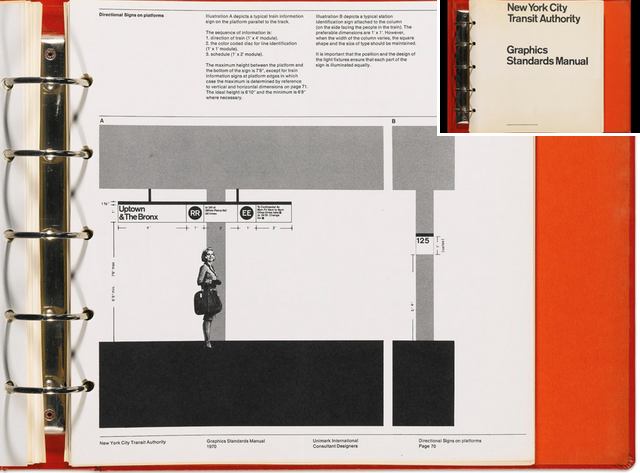 "In 1967 the New York City Transit Authority hired Massimo Vignelli and Bob Noorda, of the design firm Unimark International, to design a signage and wayfinding system that would solve the problem underground. The work they delivered, the 1970 New York City Transit Authority Graphics Standards Manual, succeeded in that goal and, perhaps unintentionally, the Standards Manual became one of the world’s classic examples of modern design, an icon of graphic design and New York cultural life. Recently rediscovered, the Standards Manual is today praised for its beauty, genius and the way it facilitates all New Yorkers’ everyday life."

Note: You may be able to get a cheaper version soon. 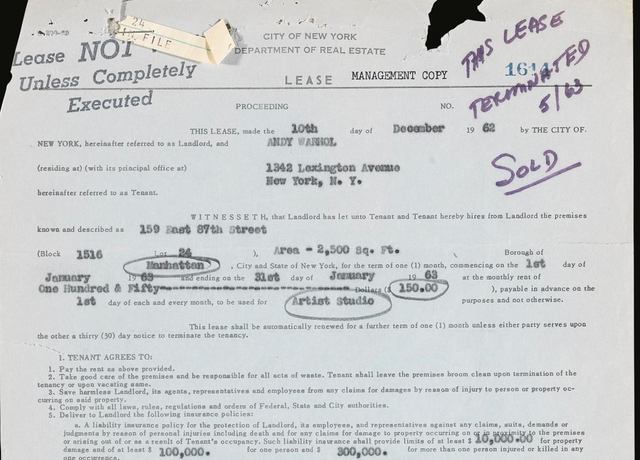 "Between 1961 and 1962, Warhol's studio was in his house at 1342 Lexington Avenue, between 89th and 90th Streets. During 1963, he worked on the second floor of an abandoned building that he leased from the city— the 13th Hook and Ladder Company, which was located on East 87th Street. While working at the Firehouse Warhol usually brought his paintings to 1342 Lexington, where they were stored rolled, or shown unstretched to visitors; visitors to the Firehouse were exceptional... until the Factory period, Warhol continued to show his work and receive friends at home." 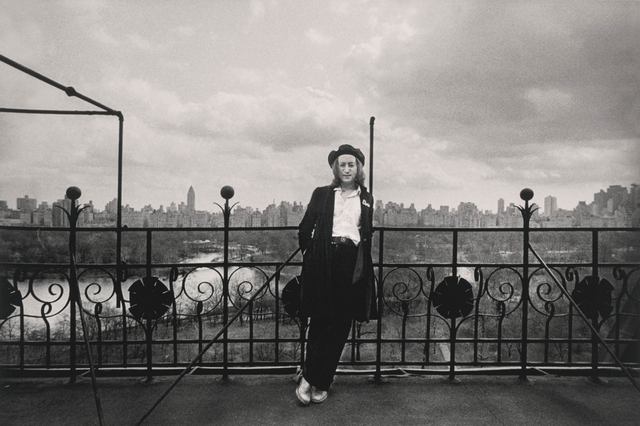 "The photojournalist Brian Hamill, a self-proclaimed ‘devoted and fiercely loyal New Yorker’ born and raised in Brooklyn... said, ‘It was February 1975. John Lennon opened the door to his lovely, simple apartment in The Dakota—a building on NYC's Westside. No publicist. No make-up person. No assistant. No bullshit. Just John Lennon. It was my third time photographing him. We shot inside for 45 minutes. We stopped for a quick bite to eat ('I'm fuckin' hungry') and he made the snacks. He did everything I asked for the purpose of my photojournalistic images. I was given no time limit. He took two minutes to write some lyrics at his kitchen table. Literally—two minutes. I ask: 'How is the roof?' John: 'Fuckin' fantastic! Great graphics. Let's go up.' He was a great fuckin' dude."

MAX'S KANSAS CITY STANDARD OPERATING PROCEDURES
Starting at $750, this item is expected to go for around $2,000. 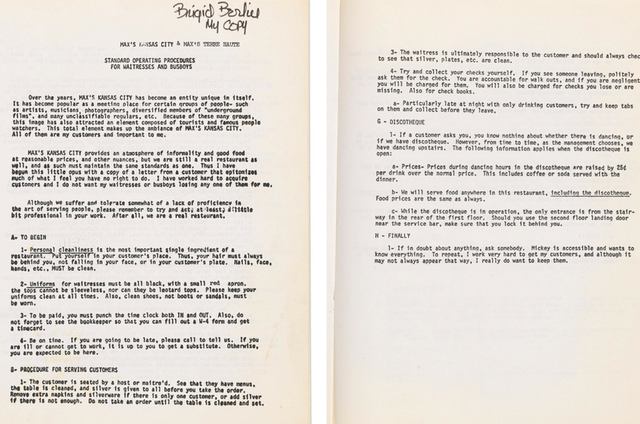 "The introduction of the MKC standard operating procedures states: 'Over the years, Max's Kansas City has become an entity unique in itself. It has become popular as a meeting place for certain groups of people—such as artists, musicians, photographers, diversified members of underground films, and many unclassifiable (sic) regulars, etc. Because of these many groups, this image has also attracted an element composed of tourists and famous people watchers. This total element makes up the ambiance of Max's Kansas City. All of them are my customers and important to me.' Then follows a list of classic and common rules for waitresses and busboys, but personalized to the special customers MKC attracted..."

#auction
#ebay
#sotheby's
#original
Do you know the scoop? Comment below or Send us a Tip