The Gothamist Week in Rock: The Virtual Edition 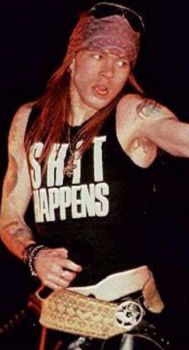 Rock Band 2 Setlist Announced
It certainly says something about the state of the music industry that perhaps the biggest music story of the week is the placement of some tunes in a video game. But what tunes! At the E3 conference out in LA, Harmonix announced the 80+ songs that will appear in the upcoming sequel to the plastic instrument rock sim. While the list overall is excellent, hitting many genres from the last 5 decades, there were some interesting standouts. Sure, it was a surprise to see a Turn on the Bright Lights-era Interpol track make the cut, and even more shocking to see a 30 year old Bob Dylan classic among those ranks. But who woulda thunk a GnR Chinese Democracy track would make it on here before seeing store shelves? Axl has decided to debut a track from the vaporware album in the game before anyone has even ever heard it -- this may be a legit sign that this album will actually come out before the end of the decade.

"Secret" Pre-Siren Shows
As you've likely heard, the annual Siren Festival is tomorrow at Coney. But with all these bands in town, playing short sets with crappy sound in 95-degree weather, there are always a couple who want to get an extra local show in under their belts before tackling the masses. Last night, three separate Sirenfolk took smaller stages around the city to warm up or their hot day ahead of them. The biggest news was that Stillwell Stage headliners Broken Social Scene squeezed onto the stage at Mercury Lounge under the guise as a Brendan Canning solo show. Elsewhere around town, The Dodos hunkered down in the basement of Cake Shop, and Ra Ra Riot hit up Union Hall. All three had to keep it on the DL, partially because of the size of the clubs for these bands, but mostly so not to steal any of the bluster from the main event. No word on any more secret sets like these through the rest of the weekend from the rest of the bands, but don't be surprised if a couple of post-Siren sets pop up while these guys are still in town.

Yazoo Renuu
The duo responsible for the background music of millions of 80s home videos are back together and touring for the first time in 25 years this summer. Known as Yaz in the States, the influential synth pioneers sold out two nights at Terminal 5 this week, as well as a third show at the Beacon tomorrow. Familiar to many of this current generation from the occasional LCD Soundststem namedrops, this reunion coincides with the reissues of both of their albums as part of a new box set, out now.

#Broken Social Scene
#guns and roses
#ra ra riot
#Siren Festival
#The Dodos
#week in rock
#yaz
#Yazoo
Do you know the scoop? Comment below or Send us a Tip