The Gates Return, to TV HBO 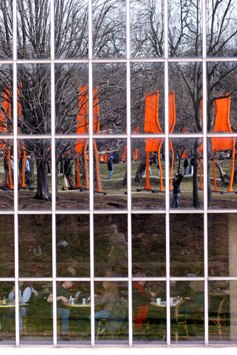 For two weeks in the winter of 2005, Central Park was filled with 7,500 saffron-paneled gates. The project was a gift from the artists Christo and Jeanne-Claude, who had been trying for four decades to launch the project. Their struggle - and success - comes to the the small screen with tonight's premiere of The Gates on HBO.

You can remember those weeks through the second part of the documentary, with almost all New Yorkers and tourists dazzled by the vastness of the project and its ability to make people talk about art and its meaning. But the best part of documentary is the beginning, captured by David and Albert Maysles in 1979 (David died, leaving Albert to work with Antonio Ferrera and Matthew Prinzing in the later part), when young Christo and Jeanne-Claude come up against city bureaucracy.

Then Parks Commissioner Gordon Davis speaks skeptically about New Yorkers' reactions to the artists spending so much money on art and skeptical and surly New Yorkers during community board meetings ("Think of the monotony of all those green trees and grass and lawns."; it's "like Picasso painting 'Guernica' over 'The Last Supper"). They find an ally in labor negotiator Theodore Kheel (better known these days as the man who is advocating for free mass transit), but still face trial by jaded New Yorker fire.

Of course, cut to 2003 when billionaire patron of the arts and mayor Michael Bloomberg gives the idea a fairy tale ending, prompting contemporary skeptics, in the form of the McLaughlin Group, George Stephanopoulos on ABC and former Parks Commissioner Henry Stern (he calls the Gates "underpants") to weigh in. After focus on the project's literal nuts and bolts and planning the synchronized unfurling with an army of voluneteers, the documentary loses some steam by endless shots of the Gates boldly standing out against nature and parkgoers gazing at the Gates.

At the end of the day, though, the film is a love letter to the spirit of Christo and Jeanne-Claude, their will to see the project through, and the idea that NYC can accept crazy ideas.

The Gates is on HBO at 10PM tonight. Some other thoughts about "The Gates" from the NY Times, Daily News, NY Press, and Sun. And check out this 2003 Wall Street Journal column by Davis, who reassesses Christo.