The Forgotten Borough's Forgotten Industry: The History Of Lighthouses On Staten Island In our digital age, lighthouses are perhaps known better for providing Instagram content from a New England getaway than for their original function. But behind those picturesque vistas lies a piece of American history that was essential to the founding of the new nation. Today there are 400 active lighthouses in the U.S., and New York City has its own unique history as a center for the luminous navigational beacons.

The Statue of Liberty, for example, originally served as a lighthouse, with beams shining out of its torch. The oldest lighthouse in the entire country, on New Jersey’s Sandy Hook, serves as a landmark for New York boaters as they return to shore. And Staten Island—known more today for its Italian-American reality TV shows—was the supply headquarters for the nation’s entire lighthouse industry for over 100 years.

You can learn all this at the National Lighthouse Museum, which is tucked in next to the St. George Ferry Terminal. The complex includes six buildings from the original lighthouse depot that once stood on the site, where it served as the central testing and distribution point for lenses, lamp oil, buoys, structural pieces and other essential equipment for lighthouses across the country. 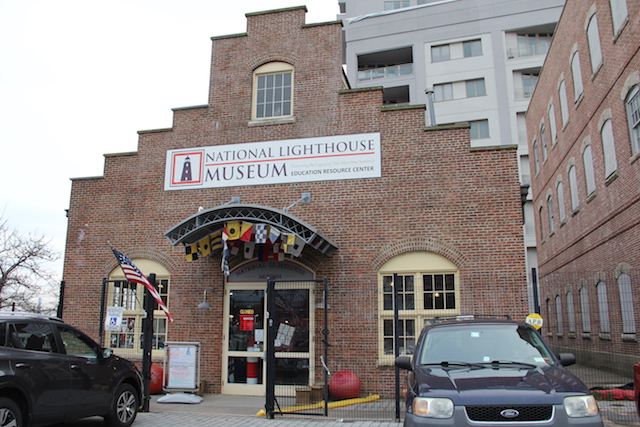 The front of the National Lighthouse Museum on Staten Island. (Claire Leaden)

The National Lighthouse Museum was bestowed on Staten Island by the American Lighthouse Coordinating Committee in 1998, when preservationists and educators decided the nation needed a “central repository” to tell the story of its lighthouses. (Maine and Michigan finished in second and third place.) After running into numerous zoning and funding issues, the museum officially opened in 2015. Its current curator and site manager Celestina “Tina” Cuadrado has 16 years’ experience at various (mostly maritime) museums, and is an extremely knowledgeable source on all things lighthouse history.

The museum walks visitors through the timeline of American lighthouses, starting in 1789 when George Washington signed the Lighthouse Act and brought all 12 colonial lighthouses under federal control. This was under the guidance of the man of the hour—Secretary Treasury Alexander Hamilton—who still remembered his close call journeying to America when he was nearly shipwrecked at Cape Hatteras off the coast of North Carolina. Hamilton also saw federal control of lighthouses as an opportunity to help repay the nation’s Revolutionary War debt, Cuadrado explained, buoying the merchant economy by securing the safety of incoming ships.

One of those original 12 lighthouses was the Sandy Hook Lighthouse in New Jersey, the oldest standing lighthouse in the country, which was first constructed after the merchant community of New York City “lost £20,000 due to shipwrecks in the first few months of 1761,” according to the New Jersey Lighthouse Society. After a few years of fundraising by 43 New York merchants, the lighthouse became active in 1764. During the Revolutionary War, the colonists removed its lamp and lens to put the incoming British fleet at a disadvantage, and later tried to destroy it with cannon fire, but the lighthouse survived. It then became another point of contention after the war since it was still owned by New York State but sat on New Jersey state property. Conflict between the states was resolved, however, when the Lighthouse Act was passed in 1789.

Over the next 63 years, most U.S. lighthouses fell into extreme disrepair. This was largely because the person tasked with overseeing “aids to navigation,” Fifth Auditor of the U.S. Treasury Stephen Pleasonton, skimped on maintenance in order to save money. As there was also no formal building approval process, many were “shoddy” buildings, according to Cuadrado, that would crumble soon after they were constructed. When numerous complaints from mariners about the dangers at sea hit Congress, a formal Lighthouse Board was established in 1851 to take over from the treasury department. The board then began searching for a central location to help systematize the business.

“When the lighthouse board was established, they needed a centralized depot for everything,” Cuadrado explained. Previously, she said, “supplies were sent from the manufacturers right to the lighthouse or to a district depot. But there was no way to maintain inventory, or to test the quality, especially of the lenses coming in.” 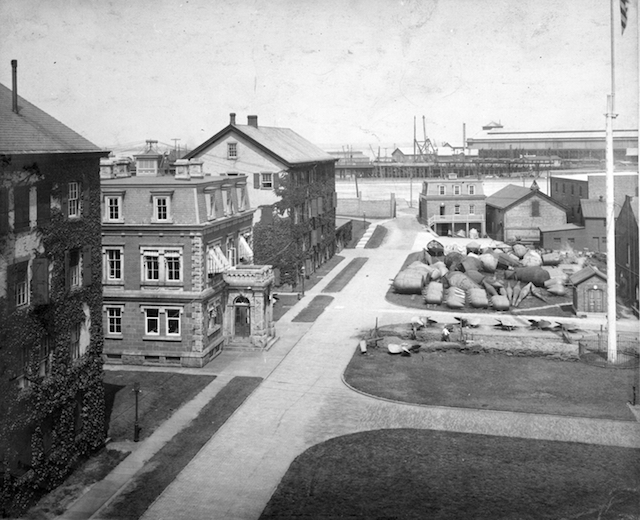 An overhead view of the entire Lighthouse Depot circa 1890. (National Lighthouse Museum/National Archives)

So, why Staten Island?

First off, it had been the site of the quarantine, or marine hospital, since 1799. Most ships entering America through New York Harbor would be stopped 200 miles offshore of Staten Island for a medical inspection. If passengers showed signs of illness, they would be brought to the hospital, and bulk goods would be placed in warehouses until they were “deemed safe” from disease, Cuadrado said.

The Revenue Marine—which would later become the Coast Guard in the early 20th century—was also centered on the island, and would enforce the quarantine and other shipping taxes and tariffs.

In 1858, wealthy Staten Island landowners formed an angry mob and burned down the hospital (patients were given ample warning to evacuate and were not harmed), since it was wreaking havoc on their property values and was a little too close for comfort for the townspeople. They were acquitted on self-defense, on the grounds that hospital workers were spreading infectious disease on the island and putting the community at risk. The patients were then sent to other isolated hospital areas, like Ward’s Island, Blackwell’s Island (Roosevelt Island today), and the “floating hospital,” a converted steamship.

Those remained the main quarantine sites for the ill, until two islands were built off the South Shore of Staten Island in 1870 and 1873, which were used until 1930. Hoffman and Swinburne Islands are are still standing today, and are now bird sanctuaries maintained by the National Park Service.

In the 1860s, the former hospital site on Staten Island was deemed the United States Lighthouse Service’s (USLHS) General Depot. It made sense for the island to serve as a shipping center, Cuadrado said, since the federal government already owned the land from the quarantine era and the Erie Canal had made New York the premier port of America.

According to Cuadrado, from 1864 to 1968 almost everything in the entire country that was used by a lighthouse keeper (who lived in, maintained, and lit the lighthouses) was either made or tested on the Staten Island depot.

Initially, the lights themselves were oil lamps paired with parabolic reflectors—mirrored surfaces that would reflect and magnify the light. But in 1822, the whole industry changed when Augustin-Jean Fresnel invented the Fresnel lens, which used lenses instead of reflectors to focus the beam. The Fresnel lens was able to capture and project 85 percent of the light emitted by a light source, much more efficient than the mere 50 percent from a parabolic reflector, Cuadrado said. Today, in addition to lighthouses, stage lights and car headlights still use Fresnel’s technology.

The engineers on the Staten Island depot would draft and design the lights, which then would be ordered from France or England, the only countries constructing Fresnel lenses at the time. Every light had to have a unique “characteristic”—steady, flashing, colored, and so on—in order to differentiate location for sailors.

“If every light was the same, you would never know where you were,” Cuadrado explained.

After the lights were ordered, they would be delivered to the depot and assembled by workers in the lamp shop, tested, and then shipped out to the lighthouse site.

“We’re still trying to figure out [who worked here] by using census newspaper records, and even oral histories or family histories,” Cuadrado said. “A lot of them were clerks processing orders from lighthouse keepers or regional district depots...we’re trying to get a handle on it.”

Prior to the 1880s, lighthouse keepers weren’t appointed based on skill and experience but more likely through nepotism, according to Cuadrado. In 1883, after the Pendleton Civil Service Reform Act was signed, the job became further professionalized and standardized, with merit-based hiring and job regulations like proper uniforms and logs of observations and data. Staten Island had its own female lighthouse keeper, Kate Walker, who served at the Robbins Reef Lighthouse from 1890 to 1919. The lighthouse still sits in New York Harbor today between the Statue of Liberty and Staten Island, and is currently being restored by the Noble Maritime Collection.

Walker’s husband was the original head keeper, but when he passed away, she took over and her son became her assistant. (Her two children lived on Staten Island during the week to go to school, and would row out to her on the weekends, Cuadrado said.) According to Cuadrado, there were over 200 women keepers in lighthouse history, the earliest in the 18th century. They often served as unofficial assistants, and if their husbands or fathers fell ill and passed away (there weren’t retirement benefits in place yet), as they were already familiar with that lighthouse it made sense for them to take over.

U.S. lighthouses were gradually fitted with electric bulbs starting between 1910 and 1930. Post-World War II automation, including time clocks for operating the lights and advancements in radio signal technology, spelled the end for lighthouse keepers. The very last civilian keeper in the U.S., for Coney Island, passed away in 2003; there is one official keeper left in Boston named Sally Snowman, appointed by the Coast Guard. 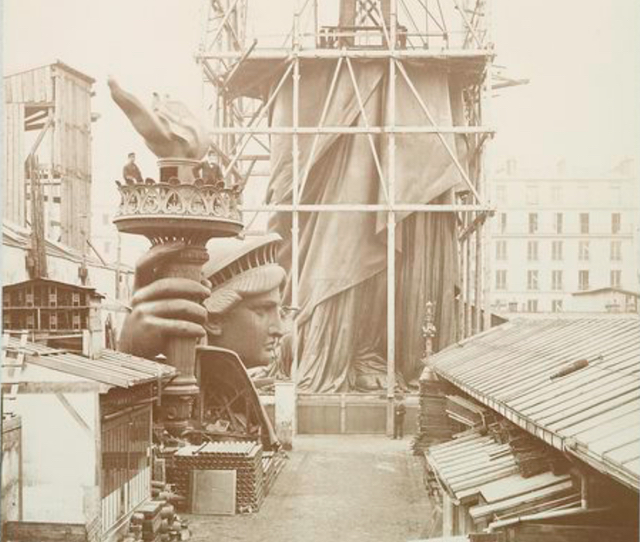 "Assemblage of the Statue of Liberty in Paris, showing the bottom half of the statue erect under scaffolding, the head and torch at its feet." (NYPL)

Though few know this today, the Statue of Liberty actually became the first electric lighthouse in the U.S. in 1886, with Staten Island depot workers tasked with finding a way to illuminate the entire statue which was to serve as a beacon for ships, said Cuadrado. At first engineers spot-lit the statue, aiming up from the feet, but unfortunately the light angles were miscalculated and ended up leaving the upper part of statue shrouded in shadow.

The torch also held nine electric arc lamps that shined straight up into the night sky, but it still wasn’t luminous enough. At one point, Joseph Funk, the foreman of the depot at the time, tried cutting out holes in the bottom of the torch and fitting it with portions of a Fresnel lens to make it brighter. The Lighthouse Board even debated painting the statue white since it was still not reflective enough.

“It’s funny because most people see it [the Statue of Liberty] as art, but at that time it was mainly viewed as a functional beacon that just wasn’t really functioning that well,” Cuadrado said.

In 1902 the entire endeavor was deemed too expensive and the lighthouse portion of the statue was abandoned. The statue was taken over by the National Park Service in 1933, and in 1984 its original torch was replaced by a new copper torch overlaid with 24 karat gold leaf. Today the torch is lit by reflection of the gold leaf—by sunlight during the day, and by 16 floodlights at night.

So, perhaps next time you eye Lady Liberty, you’ll picture her a ghostly white. Or, as you see the Staten Island Ferry or a commercial for the newest Mob family show, you’ll remember the essential industry that lit the night for mariners for hundreds of years.

#Alexander Hamilton
#flashback
#history
#lighthouse
#lighthouses
#staten island
#original
Do you know the scoop? Comment below or Send us a Tip