The First St. Patrick's Day Parade On Record Happened In NYC Over 200 Years Ago

Tomorrow, the city's St. Patrick's Day Parade may be code for locals to "avoid Midtown," but when the first one was held here 254 years ago, there wasn't exactly Midtown to avoid. Or green bagels to roll one's eyes at. There wasn't even a Declaration of Independence!

According to the History Channel, "the first parade honoring the Catholic feast day of St. Patrick, the patron saint of Ireland," was held on March 17th, 1762 by Irish soldiers serving in the British army. This is the first recorded St. Patrick's Day parade worldwide (though sometimes Boston claims they were first), and it grew as more Irish immigrants came to the U.S. in the mid-19th century, eventually spreading to other cities.

While there was "general revelry" at these early celebrations, it was a bit more tame than it is today. In fact, in Ireland pubs were closed on March 17th (!)—it was just a minor holiday there until the 1970s, and many simply went to church services to observe it. According to one look back, "America is responsible for turning St. Patrick's Day into the big party we know and love today... we can trace some of the modern revelry associated with St. Patrick's Day to the fact that prohibitions on eating meat, drinking and dancing during Lent were lifted for the day."

In the early 1800s, the parade would "consist of processions marching from parish churches in the city to the original St. Patrick's Cathedral on Mott Street." As the Irish population grew, competing parades would pop up—in 1858, there were two large ones in NYC. Around the same time, violence started breaking out enough for newspapers to report on the incidents. 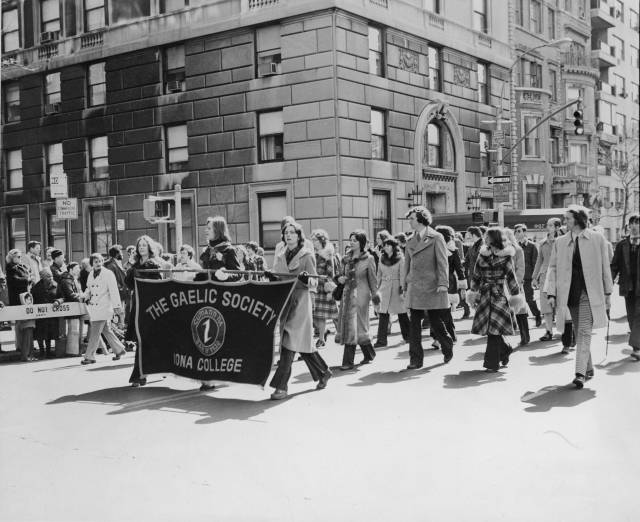 At the end of the 19th century, the Ancient Order of Hibernians set the parade route to follow Fifth Avenue, which it still follows today. The Parade is held annually on March 17th, at 11 a.m., when nearly 150,000 people begin to make their way up Fifth Avenue. And one things remains the same, it's still "a fixture in the city's social, political, and cultural life."

#history
#st. patrick's day
Do you know the scoop? Comment below or Send us a Tip