The 'Epic Tale' Of The Legendary Apollo Theater, Told In Graphic Novel Form For 85 years, the Apollo Theater has been a landmark and cornerstone of Harlem’s music scene. The iconic venue has hosted performers like Ella Fitzgerald, James Brown, Jay-Z, and Aretha Franklin. Even President Barack Obama has taken the stage (and presumably rubbed the stump of the Tree of Hope for good luck). Now, the Apollo's long history has been retold in a new graphic novel, Showtime at the Apollo: The Epic Tale of Harlem's Legendary Theater, by writer Ted Fox and illustrator James Otis Smith.

Based on Fox’s 1983 history of the theater, also titled Showtime at the Apollo, the comic revisits the venue's history from its opening days in the 1930s to its modern revival in the 1980s.

“When I started doing the work on this in 1980, many people were still with us. So I was able to talk to Lionel Hampton and Sammy Davis, Jr. and so many people who were so important, both to the Apollo and also to the history of American popular culture,” Fox said. “And they were thrilled to talk about the Apollo.” 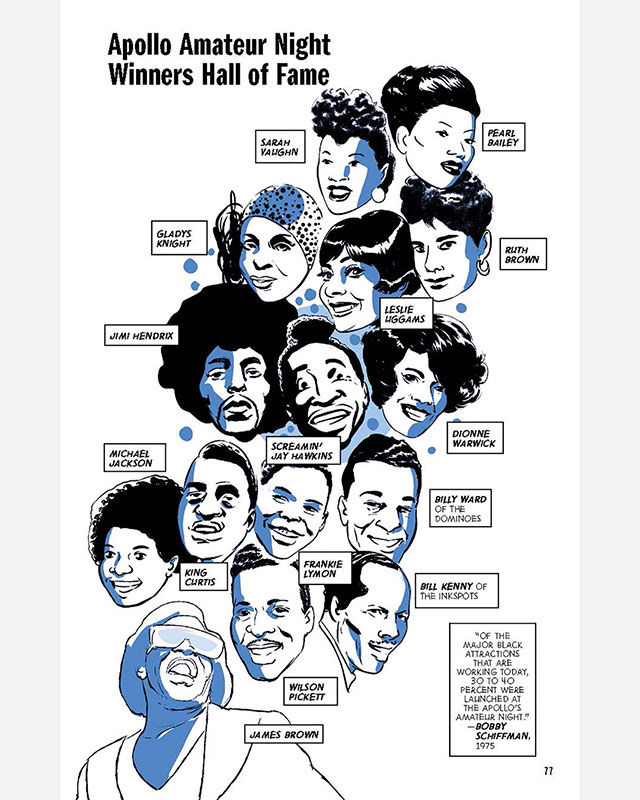 From "Showtime at the Apollo: The Epic Tale of Harlem's Legendary Theater" (Courtesy of Abrams Books)

But while the Apollo has been home to countless colorful stories over the decades, Smith’s artwork takes a more subtle approach. He employs his clean-line style to depict the hijinks that took place on and off the stage, with just a simple color palette of black, white and indigo to illustrate the highs and lows of the Apollo’s history.

“One of the things about comics is that it’s as much about what you leave out as what you put in,” Smith said. “It’s not about necessarily getting every brick of the Apollo right. It’s about making it feel like the Apollo.”

Showtime at the Apollo: The Epic Tale of Harlem's Legendary Theater is on bookshelves now. You can hear the full interview with WNYC’s Jami Floyd below:

#apollo theater
#graphic novel
#showtime at the apollo
Do you know the scoop? Comment below or Send us a Tip