The Encampment: Roosevelt Island's Past, Illuminated 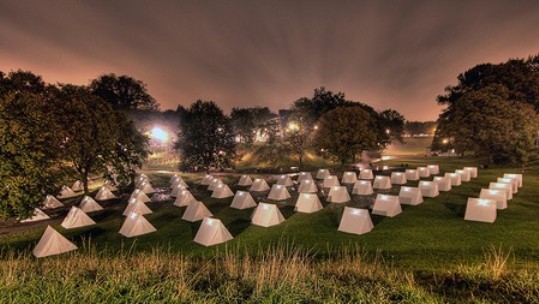 This October, artist Thom Sokoloski will build 100 white tents on Roosevelt Island, and the public will be able to see the illuminated tents at night as well as explore what's in them. The project is called The Encampment and here is a description the website:

The Encampment is a large-scale public participatory art installation. 100 - 19th century luminous tents will be erected as a work of optical art on Roosevelt's Island Southpoint. From 7pm to 7am each night, New Yorkers will be able to view the luminous symmetries of the tents from both sides of the East River, as well as visit the actual site and experience the installations in each of the tents. It proposes an archaeological dig as its metaphor; the search for artifacts is replaced by the search for a collective memory of Roosevelt Island.

Sokoloski told Metro that Roosevelt Island's past, filled with hospitals, lunatic asylum and other facilities, inspired him, "When you go deep the history is so fascinating. This will be a kind of digital archaeology, a model of exchange where the community will uncover the stories of the island’s past.” He also calls it "a metaphorical, archaeological dig into the history of mental health."

On his website, he is asking for both patrons to sponsor the project ($250 per tent) and other people to collaborate. The project will run October 5-7, during Open House New York. [This is also a good time to mention that this year's Open House New York is looking for volunteers; for more information, go to their website.]

And Sokoloski is also working on a 2008 project for Governor's Island. Called Babel Symphony, it would "re-discover that one language of humanity and to re-build the Tower of Babel through a choral and symphonic arrangement of New York City’s spoken languages."