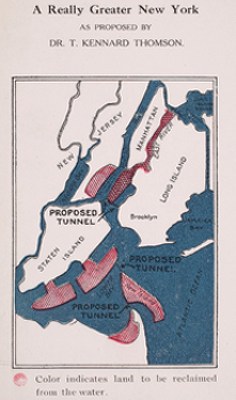 An article in the NY Times from 1912 boldly announced: "Plans to change map of the harbor... Governors Island to be annexed, and Staten Island and New Navy Island to be connected." The plan was to make Manhattan bigger, which we've seen in other old plans—like that one where we were going to drain the East River and build inside of it. Or that other one where we were going to pave the Hudson. Both of those are kind of folded into this earlier proposal.

The mastermind of the 1912 plan was (totally legit and respected) engineer T. Kennard Thomson, who declared the project would cost the city nothing.

"Speaking at a meeting of the American Society of Civil Engineers... he suggested the building of two sea walls from each end of the Battery to Governors Island and the filling in of what is now the channel at the south of Manhattan Island. The work which has been in progress for years under the Government for the extension of the island to the south should be continued until it extends about ten blocks right down the center of the harbor to about a mile and a quarter of Staten Island. Mr. Thomson reckoned that thereby eight or nine miles of docks would be added to the city and a tract of 1,400 acres worth $1,000,000,000 made available for building purposes."

Four years later, the plan was still alive, and showed up in Popular Science magazine (which showed up on Reddit today)—the article was penned by Thomson himself, and began:

"At first glance, a project to reclaim fifty square miles of land from New York Bay, to add one hundred miles of new waterfront for docks, to fill in the East River, and to prepare New York for a population of twenty million, seems somewhat stupendous, does it now?"

By the 1930s, Thomson scaled back his proposal, changing the name from "A Really Greater New York" to "A New Manhattan," which you can read more about here.