The Dreamhouse, A DIY Queer Sanctuary, Gets 'Kicked Out' Of Ridgewood Waiting on line for a drink in front of a black-and-white-vinyl-covered wall in the Dreamhouse’s backroom Saturday night, Alex Crousillat, 31, observed that being there was a bit like traveling back in time. That’s not just because of the chandeliers and other touches of faded grandeur left over from when it was the Wyckoff Manor catering hall, or even the fact that people were smoking inside.

It made sense that Crousillat was feeling prematurely nostalgic. She was one of many who came out to bid farewell to the Dreamhouse Saturday night at the packed closing party for the queer, DIY dance club and performance space in Ridgewood, Queens. Despite attendance as high as 1,000 people some nights, the artist Gage of the Boone, who runs the space, says the money he makes selling drinks and charging a cover at the door hasn’t always been enough to keep up with rent, which is upwards of $10,000 a month. That’s why he won’t be finishing out the lease, which was set to expire in August, one of the building owners confirmed.

“I am shocked we have been able to be here this long,” said Boone. “There’s a lot of debt. We tried our hardest and put every penny we made into the rent and if we couldn’t make rent one month, we just sent [the landlords] whatever we had. They were somehow okay with that for a certain amount of time.”

Boone said he is planning to be out of the space by the end of January.

Since opening in 2016 as a more extravagant reincarnation of East Williamsburg’s the Spectrum when that space closed (it is still often called by that name), the Dreamhouse has struck the perfect balance between debauchery, art and community. It’s been a place where people can go from 10 p.m. until well after other bars close to dance, see a drag show or live music, play indie video games, catch up with friends, and as some partygoers confessed, possibly hook up. It’s hosted workshops, fundraisers, art installations, and once, an aspiring Congressional candidate’s town hall for sex workers to discuss controversial anti-trafficking legislation.

Downstairs, past the giant green hand reaching around the stairwell that leads to the coat check, Cherry James, 21, recalled Saturday night that she discovered the Dreamhouse shortly after moving to New York. “It kind of helped me settle into the fact that I was trans and really mix with other gender-nonconforming and trans folk,” said James, sporting a sheer top and close-cropped, bleach-blonde hair. “It’s just very accepting. No matter what gender identity you have, what sexuality, what body type, no matter how able bodied you are, it’s just a safe space for everybody to have a good time.” 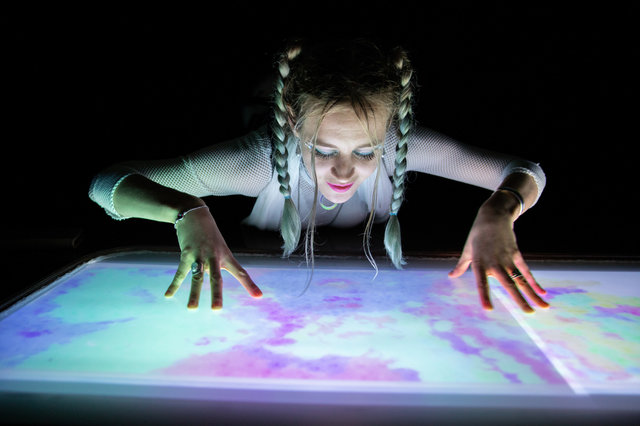 The Death By Audio Arcade was a major attraction at The Dreamhouse. (Walter Wlodarczyk / Gothamist)

Since the Dreamhouse is the sequel to another DIY space, James and others who spoke to Gothamist said they’re optimistic that another version of the venue will pop up in a new location.

But Boone said he has no plans to look for another permanent space—at least not without outside help. “I’m open to investors, I’m open to talking to people with different venues and figuring out how to collaborate, but I don’t personally think I’m open to doing it from the ground up again,” he said.

When the Spectrum first opened in late 2011 in a former aerobics studio-turned-after-hours-joint that had been “painted black, walled with mirrors, and adorned with a stripper pole and two disco balls,” rent was just $2,100 a month. Events were all donation-based, with revenue from late-night dance parties subsidizing experimental music and art showcases, affordable rehearsal space and daytime classes. After the building went into foreclosure and was sold in 2015, the Spectrum had to go.

“People have gotten pushed out of Bushwick and now we’re literally getting kicked out of Ridgewood,” said Boone. “We’re like, ‘OK, what’s next?’”

The perpetual cycle of cultural spaces getting priced out of neighborhoods they helped popularize to newcomers is exacerbated by the fact that post-industrial space in the city has become more scarce in recent years. DIY spaces in New York and elsewhere were also subject to greater scrutiny following a December 2016 fire in Oakland art space Ghost Ship that killed 36 people. But arts advocates have since sought to reframe these spaces as an asset, rather than a nuisance. They are pushing for measures that address affordability and trying to get the city to help these spaces fix code violations, rather than subjecting them to surprise raids that result in closure.

Ariel Palitz, appointed the city’s first ‘night mayor’ and head of the Office of Nightlife in March, has taken an interest in DIY spaces, but she’s still figuring out how the city can support them.

“Spaces like Spectrum that host art and performance are one of the primary reasons why the Office of Nightlife was created,” Palitz said in a statement. “We heard from many DIY venues and promoters about their concerns throughout our listening tour. Now that the tour has concluded, we are in the process of working out steps to alleviate some of those challenges, to help underground venues and performance spaces open safely and legally.”

In the meantime, Boone is planning to adapt to the shortage of affordable space by shifting his focus to his company Dreamhouse Productions, which puts on events in other venues. He said he believes New York has more progressive venues now than in the past that are capable of creating safe spaces for queer people. These include legal, above-ground establishments like Secret Project Robot and Elsewhere that were opened by veterans of the DIY scene.

“It’s really important for spaces to book people of color and queer people who are not normative,” said Boone. “A lot of spaces make the choice of who to book based on the amount of money it will bring in and I think that’s fucked up.”

Boone also hopes to bring art installations and performances to spaces that are not linked to nightlife. “I’m interested in art galleries,” he said. “A church would be nice.”

#LGBTQ
#queens
#ridgewood
#spectrum
#the dreamhouse
#original
Do you know the scoop? Comment below or Send us a Tip