NYC's Department of Environmental Protection (DEP) has over 550 photos archived online, documenting everything from rock excavation via mule to the often claustrophobic conditions workers dealt with while constructing the water tunnels. They even held dinners underground, with on-site entertainment in the form of boxing matches.

A brief history of our water supply system: In 1677 the first public well was dug in front of the old fort at Bowling Green, and as the city grew, "well water became polluted and supply was insufficient. After exploring alternatives for increasing supply, the City decided to impound water from the Croton River, in what is now Westchester County, and to build an aqueduct to carry water from the Old Croton Reservoir to the City." This plan partially included the massive reservoir that opened in 1842—it stood where Bryant Park is now located, and remnants of it can be found in the New York Public Library. 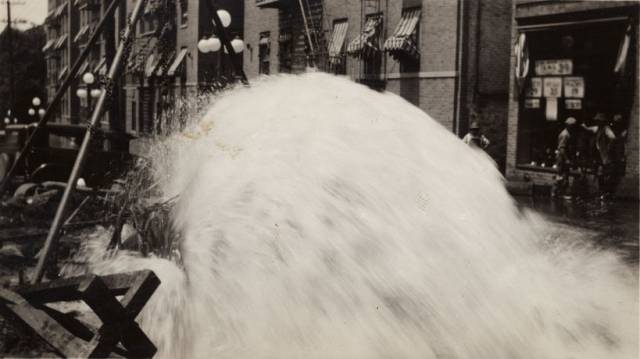 An explosion of water coming out of the main, presumably after the machine has been removed. Using this method to clean mains could not be done frequently because of the complexity involved and because the constant scraping could eventually weaken the main leading to erosion and leaking. (DEP)

Click through for a detailed look at how the DEP continued to help shape the city's water supply system over the decades.

#dep
#flashback
#history
#nyc water
#original
Do you know the scoop? Comment below or Send us a Tip
A new Gothamist is coming! We’ve moved comments over to our beta site. Click here to join the conversation and get a preview of our new website.