It's no secret that the toxic sludge- and poop-filled Gowanus Canal has something of a signature stench. But now a team of researchers has mapped the scents that permeate the surrounding neighborhood, differentiating between "negative manmade smells," "pleasing manmade smells," and "organic smells"—for art.

As part of a design contest organized by urban design advocacy group Gowanus by Design, a team of researchers spent three days over the summer (peak stench season) walking around the neighborhood doing some intentional sniffing, noting and categorizing the smells they encountered at various locations.

Their conclusions? The most offensive, manmade scents cling to the streets around the canal's southern end, where you're likely to encounter the smell of sewage, oil, or garbage, among others. Further inland, and particularly as you move toward 4th Avenue, things take a surprising turn for the pleasant—perhaps the scent of Korean barbecue or fancy pastas? At the northern end, those less offensive scents meet "organic smells" such as salt marsh and earth, which may not be your perfume of choice, but are certainly preferable to the persistent poo smell that afflicts other parts of the area.

The odor map, designed by the Annie Barrett Studio, is on display at the Site:Brooklyn gallery until March 5th along with a sister map that shows Gowanus's litter levels in relation to its very few public trash cans. Unsurprisingly, the most litter-ridden areas seem to correlate with the stinkiest parts of the neighborhood—but what is a bit of a headscratcher is the fact that those areas are the ones that border the neighborhood's token nine trash cans. Maybe an overflow situation. 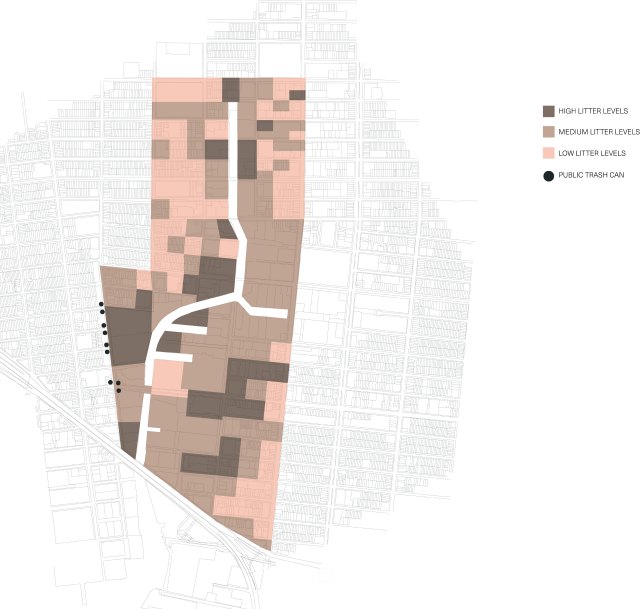 These maps won second place in the Axis Civitas design contest, which invited entrants to "map and present conditions relevant to the Gowanus area." The competition description notes that as the neighborhood further gentrifies, "the community has been forced to grapple with the conflicting impacts of hazardous subsurface conditions, private development, agency oversight, CSOs, and global warming. The competition is a reaction to these forces and is intended to address the lack of a coherent sustainable urban strategy for this area of Brooklyn."

The first-place winners of the contest examined the microbiome of the bottom of the Gowanus Canal. The competition organizers at Gowanus by Design are hoping to put the maps online and allow the public to contribute their own data. [h/t DNAinfo via Daily Intel]

#axis civitas
#Gowanus
#gowanus by design
#gowanus canal
#map
Do you know the scoop? Comment below or Send us a Tip