The Day of The Dark Knight is Upon Us! 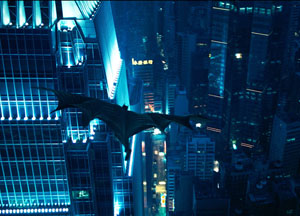 Today the little movie that could, The Dark Knight, opens on the wings of a cosmic hype that could make it the third biggest box office earner this year.

The first screenings began at midnight, continuing through the night, and many moviegoers were declaring it the best movie ever while still waiting on line to get in. The Observer talked to some fanboys (and girls) waiting for the IMAX screening at Lincoln Center last night; before it started Brandeis University student Andrew Litwin declared The Dark Knight "probably one of the most amazing movies I've ever seen."

Others, like funnyman Aziz Ansari, are already leading the backlash. Despite publicly announcing that “if it were physically possible, I would fu*k this movie,” Ansari is now whistling a different tune in this Funny or Die video. Elsewhere, Vermont senator Pat Leahy dishes about his one-line cameo in The Dark Knight, in which he tells the Joker “We’re not intimidated by thugs.” (Unlike Dick Cheney, the Joker’s reply is more elegant than “Go fu*k yourself.” – watch the clip here.) And Animal NY has photos of other movie posters artfully "defaced in a Jokerly fashion."

#batman
#critics
#heath ledger
#imax
#movie
#review
#the dark knight
Do you know the scoop? Comment below or Send us a Tip