Sponsored by ABC's new drama Red Widow: Organized crime has always thrived on intimidation and brutal acts, but sometimes the violence is unspeakably gruesome. Here are some of the most notorious mob hits, from a gruesome payback to the stool pigeon who couldn't fly: 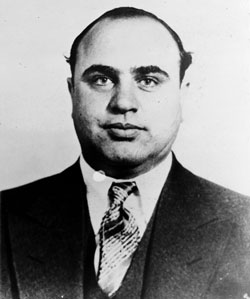 Al Capone had an alibi for the massacre
THE ST. VALENTINE'S DAY MASSACRE

: Considered the "most infamous of all gangland slayings in America," seven men were lined up against a Chicago garage's wall on February 14, 1929 and executed by machine gun-wielding men who posed as police officers.

The victims, whose bodies were ripped apart by the gunfire, were members of Bugs Moran's North Side Gang, who had been encroaching on Al Capone's territory. Months earlier, Moran also orchestrated a drive-by shooting, attacking Capone at a diner, giving Moran the dubious distinction of innovating the "drive-by" for the modern era.

Moran wasn't killed because he happened to sleep in that day. Capone wasn't charged with the murders because he had an alibi (the ol' "I was in Florida" excuse) but government officials redoubled their emphasis on stopping Capone. In 1931, Capone was put away for tax evasion.

The Golden Dragon Restaurant Massacre: In 1977, two factions of the Triads, the Joe Boys and the Ping Boys, were battling over money from illegal firecracker sales in San Francisco. The Ping Boys got 10% on the sales, and the Joe Boys wanted to steal that, but the Ping Boys managed to thwart them, killing one Joe Boy member and injuring others. But two months later on September 4, 1977, the Joe Boys went to exact their revenge, by heading to the Golden Dragon Restaurant, where Ping Boy member Michael Louie was dining.

Three masked men entered, firing all around. Five people, including two tourists, were killed and 11 others were wounded. None were gang members and the event prompted the San Francisco Police Department to form an Asian Gang Task Force. 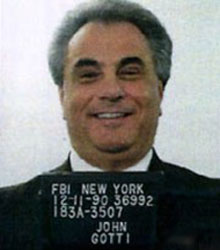 John Gotti was worried Castellano would kill him first
SIDEWALK KILLING OF PAUL CASTELLANO: Just blocks from Grand Central Terminal and the United Nations, Sparks Steak House is located in the heart of New York City's busy Midtown Manhattan business district. And on December 16, 1985, with the city full of holiday visitors, the location was chosen as the spot where four men gunned down Gambino crime boss Paul Castellano and underboss Thomas Bilotti.

John Gotti, another Gambino underboss, was the mastermind of the hit, because he wasn't pleased with how Castellano was running the crime family. Gotti was also concerned that he would eventually be killed so he acted first. After reaching within the Gambino organization and to other crime families for support, a plot was devised to have Castelleno pay his respects to the son of a deceased gangster at Sparks.

As the pair were stepping out of a car to head into the restaurant, the men, wearing long light colored trench coats and black fur Russian-style hats, fired repeatedly at them. Castellano was shot six times in the head, his body on the sidewalk. It turns out that Gotti, who eventually seized control of the Gambino crime family, had been across the street in a car watching the hit—he drove past the restaurant to see that Castellano was dead for good.

MURDER OF BUGSY SIEGEL: Born to an immigrant Jewish family in Williamsburg, Brooklyn, Benjamin "Bugsy" Siegel ran a bootlegging operation with Meyer Lansky in his youth. Then he and Lansky worked with the Genovese crime family, with Siegel helping kill Lucky Luciano's rivals so Luciano could rise to the top. He moved West, starting a numbers racket and extorting money from Hollywood figures as well as spurring on development in Las Vegas.

Still, he was a "textbook sociopath," who had little remorse. Lansky once said, "He was even quicker to take action than those hot-blooded Sicilians, the first to start punching and shooting. Nobody reacted faster than Benny." And his nickname was derived from his "tendency to 'go bugs' whenever he was angered or thwarted."

On June 20, 1947, Siegel was reading the Los Angeles Times in the Beverly HIlls home of his girlfriend Virginia Hill when someone fired through the window with a .30-calliber M1 carbine, hitting him 3-4 times in the head, with one shot reportedly blowing an eye out of his head. The murder was never solved. 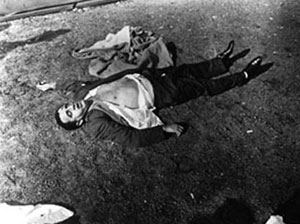 Abe "Kid Twist" Reles
"THE CANARY WHO SANG BUT COULDN'T FLY" During the 1930s and 1940s, the press dubbed the enforcement arm of the National Crime Syndicate, which included the Italian Mafia and Jewish Mafia, "Murder Inc." The top muscle of the Jewish Brownsville Boys was Abe "Kid Twist" Reles, whose speciality was shoving an ice pick in victims' ears and into their brains.

In 1940, when he was on the hook for multiple murders, Reles became a government informant, helping the feds implicate many of his fellow gangsters. On November 12, 1941, Reles died falling from a sixth-floor window of the Half Moon Hotel in Coney Island, where he was in police custody. It was reported that he fell while trying to escape (knotted sheets were found), but some suspect he was actually pushed so he couldn't testify against others, including Bugsy Siegel.

One newspaper called him, "The Canary Who Sang, But Couldn't Fly" and his death sparked the usage of the word "defenestration." 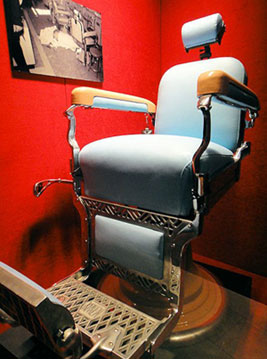 The barbershop chair is now at the Mob Museum in Las Vegas
LORD HIGH EXECUTIONER'S LAST HAIRCUT Albert Anastasia ran Murder Inc. in the 1950s. His crew carried out 700 murders—he was so feared that his nicknames were "Mad Hatter" and "Lord High Executioner"—and he became the head of the Gambino crime family. But he himself was executed in a rare daytime assassination.

On October 25, 1957 at 10:20 a.m., Anastasia was getting a haircut and shave at the barbershop inside the Park Sheraton Hotel in midtown Manhattan in New York City. Suddenly two men, with scarves over their faces, stormed in and fired at Anastasia. From the NY Times (PDF):

Anastasia leaped forward with the first report. His heavy feet kicked at the foot rest and tore it away. He landed on his feet, weaving. He did not turn around the face the killers. he lunged further forward, still facing the mirror. The second spurt of bullets threw him against the glass shelving in front of the mirror. He grabbed for the shelving and brought a glass of bay rum to the tiles with a shattering crash. He took two further shots. Then the last shot—so the police figure it—took him back of the head.

A newspaper reporter broke the news to Anastasia's brother, Anthony Anastasia who headed the International Longshoremen's Association, "Tony, you know what happened to Albert?  Albert was just knocked off over in the Park Sheraton Hotel. Just a couple minutes ago." Anthony Anastasia started crying and the hung up.

KILL THE IRISHMAN During the 1970s, competing gangs fought to control the underworld in Cleveland: On one side, the Italian Mafia. On the other, a rising faction of Irish-Americans led by Danny Greene. Their war involved car bombings and Greene himself was connected to 75-80% of them.

Greene became a media personality and was fiercely proud of his Irish ancestry, wearing green clothes and a green crucifix and driving a green car. He would also reportedly say things like, "I have no axe to grind, but if these maggots in this so-called Mafia want to come after me, I'm over here by the Celtic Club. I'm not hard to find." On October 6, 1977, Greene went to the dentist and when he returned to his car, a bomb detonated in the neighboring car and he was killed—a law enforcement official called it the Trojan Horse Attack. 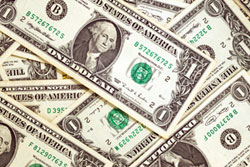 Via Shutterstock
STICKING IT WHERE THE SUN DON'T SHINE Angelo Bruno headed the Philadelphia crime family for two decades and earned the nickname "The Gentle Don" because he preferred to talk things out rather than resort to violence. However, his decision to allow the New York City's Five Families operate in Atlantic City—which was more domain of the Philadelphia mob—in exchange for a percentage upset his crew and Bruno was killed in 1980.

It was determined by the mafia's Commission that Bruno's consigliere Antonio Caponigro ordered the hit with approval. On April 18, 1980, Caponigro's body was found in the trunk of a car in the Bronx; the FBI said he had been "tortured, beaten, strangled and repeatedly stabbed and shot." Additionally, his mouth and anus were stuffed with about $300 in dollar bills, a message that he had become too greedy.