Walt Whitman, America's bard and eternal pride of Brooklyn, never stayed in one place for very long. During 28 years as a resident of Brooklyn, he had at least 15 different addresses. All have vanished into the real estate market’s eternal and infernal churn— all but 99 Ryerson Street in Clinton Hill. The vinyl-sided rowhouse is at the center of an argument about architectural ugly ducklings and whether they sometimes deserve to be landmarked because, let’s say, a world-historical genius dwelt there when he published a volume of poems that defines the American character as much as any work of art ever has and maybe ever will.

“Whitman was living at 99 Ryerson as he finished the great American epic,” said NYU professor Karen Karbiener, referring to Leaves of Grass. “This is the house that we should honor as an incredible birthplace of American culture, yet there's no protection on it.”

That’s not for lack of trying.

Listen to Jim O'Grady's report on WNYC for more details:

The Coalition to Save Walt Whitman's House, a group of writers and preservationists, last year asked the Landmarks Preservation Commission to consider protecting it as an individual landmark. Brooklyn poet Brad Vogel helped research, write, and file the application. “Underneath the vinyl siding, 99 Ryerson is the real deal,” he said. “It’s a shrine for people because it’s a touchstone of Walt Whitman, and it contributes to the cultural life of New York.”

The commission, which inclines toward preserving structures of architectural distinction, was unpersuaded. It turned down the request last December. Preservationists are now making a second push to preserve the property, which is poorly maintained and located near a gentrifying stretch of once down-at-the-heel but now cocktail-bar-having Myrtle Avenue.

As for the rejection of the original application, commission spokeswoman Zodet Negron cited three problems. “We consider the integrity of the building, which is whether or not it has been altered,” she told WNYC. Oopsie: the building at 99 Reyerson Street has an entire third floor that was not there in 1855, and its exterior might be described as “21st Century Ahistorical Hangdog.”

Negron added that commission research showed the home was associated with the Whitman family for only six months, and that no part of Whitman's epic poem was penned there. “The first edition of Leaves of Grass had been written and submitted to the copyright office before the purchase of this house,” she said.

The frontispiece from a Leaves of Grass first edition features a Samuel Hollyer engraving based on a Gabriel Harrison daguerreotype, Brooklyn, 1855 (Library of Congress's Rare Book & Special Collections Division)
Vogel calmly rebutted each point, beginning with the length of the poet’s stay: “In Whitman's own records, in which he wrote about where he lived in New York and in Brooklyn, he says, ‘May of 1855 to May 1st of 1856 at 99 Ryerson Street.’” Vogel then cited a peculiarity of 19th century copyright law—authors needed no more than a title page to file for it—and concluded that some part of Leaves of Grass was very likely composed at the location.

That left the drawback of the building’s drab vernacular, which Vogel said was minor compared to the major American artist who once lived there in his prime. “I'm calling on the Landmarks Commission to look back at its original founding purpose,” Vogel said. “Its own authorization language talks about historical and cultural landmarks, not just architectural or aesthetic gems.”

Two of Whitman's homes are already preserved: his birthplace on Long Island and the rowhouse in Camden, New Jersey, where he died in 1892. But Karbiener and others say there needs to be one more—in New York City, where the poet lived the longest, had his most penetrating visions, and did the bulk of his best work. 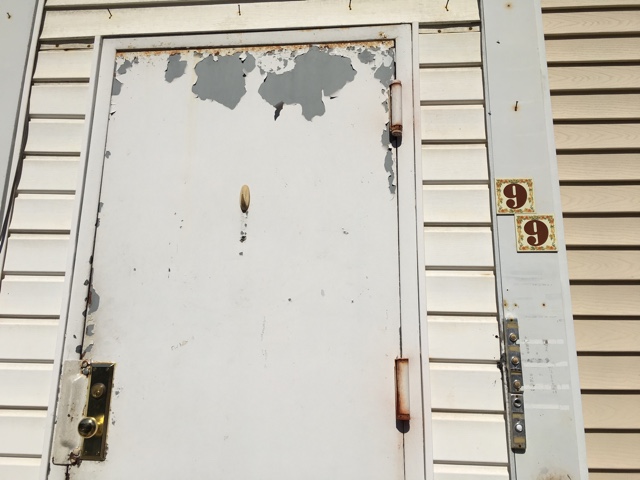 Professor Karbiener contended that the ordinariness of 99 Ryerson Street was actually an asset, given how Whitman was prone to celebrate the quotidian. “This is not a fancy mansion,” she said. “This is not a beautiful home like Charles Dickens had in London. This is, as it was called, a mechanic's house.”

As of last week, the building appeared inhabited: there were curtains on some windows and six doorbells. But no one answered when Karbiener rang. A neighbor said the third floor windows are lately always open, even when it rains. Efforts to reach the owner through a law firm connected to the property were unsuccessful.

#brooklyn
#clinton hill
#leaves of grass
#poetry
#real estate
#walt whitman
#original
Do you know the scoop? Comment below or Send us a Tip