The City of New York Vs. Homer Simpson, 17 Years Later 17 years ago this week, the Simpson family became New York City tourists in their 179th episode, titled: "The City of New York vs. Homer Simpson." How did The Simpsons' New York City compare to the real 1997 New York City? Not bad, Groening & Gang. Let's take a look.

You don't actually get to New York until more than five minutes in to the episode, and then it's Old New York, as Homer tells the family about his bad experience there from decades ago—"Oh, Homer, of course you'll have a bad impression of New York if you only focus on the pimps and the CHUDs," Marge tells him. This looks like late 1970s NYC: 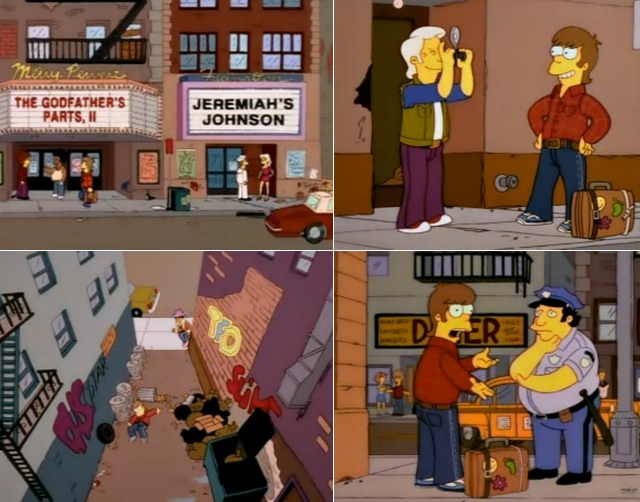 Homer returns to the city begrudgingly, where his car has been abandoned by Barney, and booted by the NYPD. Upon arriving, Marge declares: "lt's wall-to-wall landmarks. The Williamsburg Bridge. Fourth Avenue. Governors lsland." They depart Penn Station and separate—while Homer waits for the parking ticket agent at the Austin J. Tobin Plaza at the World Trade Center, Marge and the kids zig zag across Manhattan. They visit Chinatown, Broadway, the Statue of Liberty, the Mad magazine offices, a fancy shoe store (perhaps on 5th Avenue?), and Central Park. Apparently animators were told to make a detailed replica of NYC:

"David Silverman was sent to Manhattan to take hundreds of pictures of the city and areas around the World Trade Center. When he returned, Lance Wilder and his team spent time creating new scenes and backgrounds, incorporating small details such as signs and hundreds of extras that would correctly illustrate the city. Oakley and Weinstein were pleased with the final results, and both noted that the buildings, streets, and even elevator cabins were detailed closely to their real life counterparts. In the final scene, as the family is seen driving away from New York on the George Washington Bridge, the credits roll with the 'camera' gradually pulling back from a view of the car, to a view of the side, and then on to a panorama view of the city; as if the whole sequence was being shot from a helicopter.

Director Jim Reardon wanted to replicate films that ended in a similar way, and commented that, 'I remembered that every movie located in New York would pull back if you were leaving town on a bridge.' Shortly before the episode aired, the production staff contacted Fox to make sure they would not run commercials during the credits."

Khlav Kalash, though... that's not real, is it? While there's a recipe online, it's suspected that was created after this episode aired—if you want to try the meat on a stick, here it is (best served with crab juice).

Following the September 11th attacks (which The Simpsons tried to warn us about), this episode was taken out of syndication (the Twin Towers are prominently featured). It has since returned, and is currently available on Amazon Prime.

#The City of New York vs. Homer Simpson
#the simpsons
#tv
#original
Do you know the scoop? Comment below or Send us a Tip