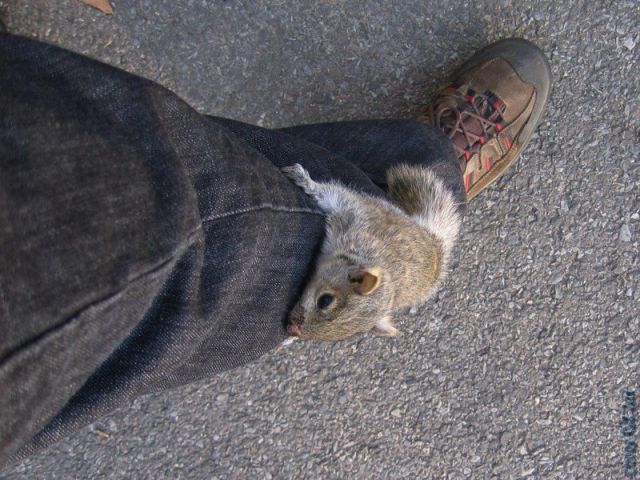 On a recent trip to Prospect Park, The City Birder saw more than just nesting birds. While walking home on Park Drive near the Meadowport Arch, he noticed a young squirrel walking directly into 3rd Street.

In an attempt to save it, he blocked its path towards the traffic, picked it up, carried it back into the woods, and placed it behind a fence. But the squirrel was immediately back on its suicide mission, walking towards the road.

This time, though, when I blocked his path with my boot. When he got to the top of my pants, he tried to push his way into my coat. The sun was going down and he was cold, so I let him climb into my pocket. He curled into a ball and promptly fell asleep.

I spent the next 30 minutes standing at the side of the road, talking on my cellphone to a New York City 311 operator. Apparently, after 5PM all city agencies, Animal Care and Control, wildlife rescue departments, department of parks, etc., are closed for the evening. The operator recommended that I take it home and call again in the morning.

After a night in a small box, kept warm with a towel and heating pad, it was time to head back to nature. A Parks Department staffer was called for advice, but her irate and misguided advice didn't help. And later, a call to 311 only yielded the following response: “The city doesn’t deal with orphaned squirrels or pigeons.”

A failed attempt to let it free in the park, a subway ride trip to Manhattan and a visit to a squirrel rescuer--and the unlikely twosome had finally found some help. The rescuer explained "that Eastern Gray Squirrels live about three years. There are many dangers in city parks, but sometimes mothers just die and the young panic, leaving the nest in search of food." This one will be okay and the City Birder definitely went above and beyond the call of duty, but we're not sure everyone should pick up every orphaned animal you see.