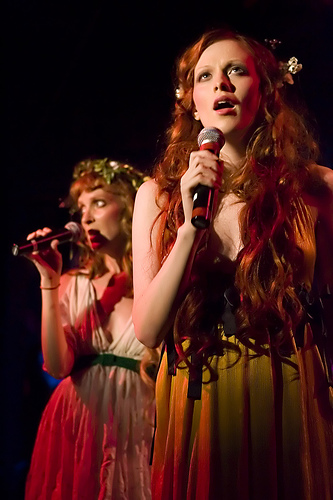 How did the Citizens Band begin?
Jorjee Douglass and I have been friends for fifteen years and she was basically my big sister, role model, rock star. I was just so obsessed with her especially when I first met her and she always had the idea of doing a political cabaret and we moved to LA together at the same time which was right around the time Bush stole the first election. And we attempted to do a political cabaret there and it just didn’t work in LA. So when Bush got reelected, we were all sitting around one drunken night, mourning the outcast state of our political scene with Paul and Angela, and a few others, and we revisted the idea and felt really compelled to try it out again in New York and it just took off like a house on fire. And from the start Karen and Rain, Paul and Angela, and a bunch of others we got together and it formed really naturally. The history of cabaret, I think that in times of political strife it seems only natural for politics to creep into entertainment so it wasn’t really something we planned out it just felt like a need, or something we had to do. (Sarah Sophie Flicker)

Can you explain the group dynamic?
Our group dymanic is quite unique. We have a diverse group of rascals from all walks of life. Ronin is a school teacher and our rock. She's so direct yet hysterically witty she knows how to make us all focus, she comes to rehearsals after school and always throws herself into it. Then you've got myself, who has been a model for years and I somehow fit in, Sarah Flicker is a maverick and is the real driving force behind us. The reason why it works is that we all somehow bring out the best in each other, we are all so different as individuals but we all connect when put in the same room together, its magic. (Karen Elson)

What do you hope to accomplish through the band?
Many of us are of the age where Bill Clinton was the first president that we were old enough to vote for, and because this, were lulled into a state of real well-being and faith that our government, at least most of the time, represented things we could stand behind.

When the first Bust "election" happened it was a real shock. The cabaret has been a natural response to what is going on politcally. Not only was our election stolen and our voices silenced, but here were these men (and a few women!) committing absolute atrocities in our name!

Jorjee Douglass and I had been talking about doing a political cabaret for some time but when Bush took office we felt very compelled. When things are so disheartening anything you can do to make your voice heard, even to only a few people, is helpful.

We also are very inspired by the history of cabaret as a tool for political protest. One of the things we try to do is look to the past as a means to examine the present. There are so many incredible songs from the early 1900's that easily could have been written today. I find the idea of the universal drama really interesting, in the sense that, as humans, we repeat the same dramas over and over again and the duty is ours to explore those historical mistakes and ddramas and try to learn from them.

For example, I found the lyrics to a song called "Gasoline" that were written in 1913 that express the same concerns about gasoline, money, politics and power that we are struggling with now...both environmentally and politically! So we took the lyrics and wrote some music and it's one of my favorite songs that we perform!

So, I suppose part of what we are trying to accomplish with the band is our own understanding of the world we are in now by looking at our own political history.

I find that a lot of times the best art is made when we are working out personal issues in a public forum. (Sarah Sophie Flicker)

Please share your strangest “only in New York” story.
My strangest NY experience has yet to happen but receiving an Emmy on the stage of The Radio City Music Hall ranks right up there. (Ian)

Which New Yorker do you most admire?
Anne. She runs the laundromat on First Avenue and Second Street. She watches out for all the old-time neighborhood guys. The few remaining ones, that is. (Rachelle)

Given the opportunity, how would you change New York?
The only way I would change New York is by making it my home again. And bringing back a little of the old Times Square. (Ian)

What’s your idea of a perfect day of recreation in New York?
I am in love with the bicycle path along the west-side. To ride under blossoming trees one moment and then a highway overpass the next. To pass by a grassy field that slopes down toward the beautiful decay of an ancient pier thrusting from the Hudson. I've been moderately obsessed with the Highline for years and can't wait to actually get up there without having to do it gorilla urban-explorer style. A perfect day is one of wandering around this endlessly amazing city. (Chelsea Bacon)

What’s the best subway line?
The newer #6 cars are nice. Stepping into the train is a bit like being abducted by a species of super-polite aliens. The lighting is preternaturally bright, but the LED keeps you from losing your orientation in time and space. The recorded announcements are pleasant and reassuring. The bell sound of the closing door is poignant without being overly sentimental. Still, it's one of the most unfortunately shrieky tracks in town. I used to play accordion on the subway platforms a while back, so I notice that stuff alot. (Rachelle)

Best venue to see music.
Not just because we are performing there, my favorite place to see music right now is the HighLine Ballroom. I'm not much of a scenester, so I always appreciate a place that doesn't make you feel like you should be grateful for stepping foot on their floor....a place that is more interested in the music than in some fancy scene. The sound is fantastic throughout and there's not a single bad sight-line in the place…And they serve food, which a girl's gotta love. Mostly, I like that Steve (Bensusan) contributes to the Friends of the Highline, maintaining a connection with the community rather than just changing it. (Chelsea Bacon)