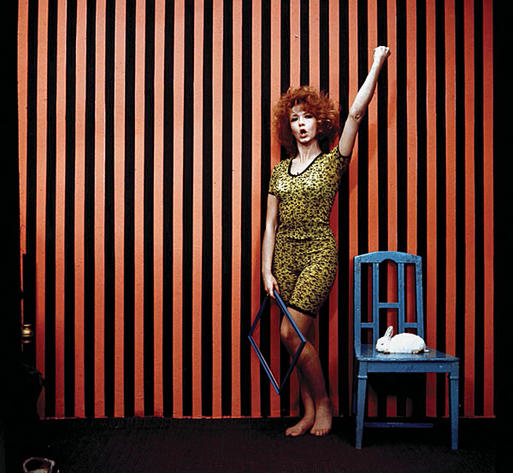 W.R.: Mysteries of the Organism
Brooklyn Academy of Music

Repressive political regimes and free-wheeling cultural expression can go together hand in hand, and the flowering of film in Yugoslavia during the '60s is a great example of it. BAM Cinematek is devoting a series this month to this Black Wave, a film movement that combined "artistic, sexual, and ideological freedom with a sense of humor." One of the major features in this group of films is a new 35 mm print of the bizarre and brilliant W.R. by Dušan Makavejev.

A movie which combines documentary footage and narrative sequences with surrealist tendencies about two young girls who are proponents of free love, W.R. proposes a radical argument about the combination of sex and politics with some pretty explicit footage. In one segment, which got the film banned in Yugoslavia, an artist Nancy Godfrey does a plaster cast of an erect penis. There's also a lot of frank discussion of masturbation and the system of Communism, as well as the work of Austrian psychologist Wilhelm Reich, for whom the film is named. (The movie's infamous "plaster cast" scene sent our otherwise quite serious film professor into embarrassed giggles when he showed it in graduate school.) This is a movie that uses whimsy and shock value to get its audience talking. For more details on WR's themes read critic Jonathan Rosenbaum's essay from the Criterion Collection DVD.

Other movie events happening around town this weekend include appearances by the director of the typeset documentary Helvetica, Gary Hustwit, on Friday and Saturday at the 6:25 pm and 8:20 pm screenings at the IFC Center, a run of the well-regarded music documentary Great Wall of Sound starts at the Angelika and Lincoln Plaza, and tonight at 6 pm return to Martin Scorsese's Mean Streets with a screening of the gangster classic at MoMA as a part of their A Sense of Where You Are series.