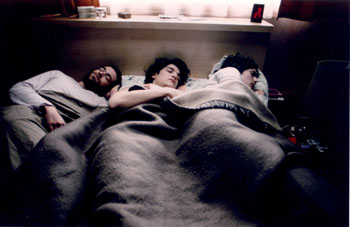 For some reason in French film even the stupidest fights between couples or siblings or ex-spouses seem oh so romantic. In Dans Paris, an entry in last year's Cannes Film Festival, director Christophe Honore attempts to capture a small sliver of the manic life for two bickering brothers living with their argumentative father in a small apartment in Paris. Romain Duris plays Paul, the elder brother, who's recently returned to the city after a failed stint of domesticity with his girlfriend out in the country. Younger brother, Jonathan (the gorgeous Louis Garrel) is determined to cheer up morose Paul, however his clownish antics keep getting interrupted by various comely young women who want to sleep with him. Jonathan's like cat nip to them, and who can blame them when Garrel, the third generation in a line of French film actors, has the face of a Greek statue or a Jean Cocteau drawing. The movie has the playfulness of an early French New Wave film, as it messes about with narrative address and continuity, but it also has a dark, neurotic undertone. It's a fascinating little work.

Other movie events happening around town this weekend include an homage to amateur 8mm, 16mm and Super8 film at the fifth annual Home Movie Day 2007! at Anthology Film Archives, a showing tonight at 6 pm of Nights of Cabiria which includes 7 additional minutes that's part of the Rialto Film 10th Anniversary series at MoMA, and a bunch of great Gérard Depardieu movies at Walter Reade particularly François Truffaut's The Last Metro with Catherine Deneuve on Saturday and Sunday.