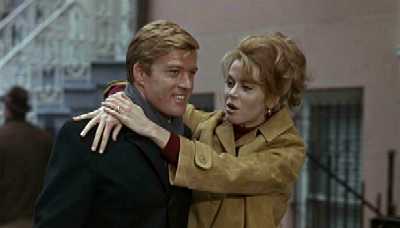 To close out this year's Central Park Film Festival, five nights of free out door movies in the park, the organizers put it to the people to choose the ultimate date night movie featuring our fair city. Out of Hitch, The Way We Were and Barefoot in the Park, Gothamist thinks the city chose wisely and well. If you've never seen the movie version of Neil Simon's play starring Jane Fonda and Robert Redford, we highly recommend staking out a spot on the grass on Saturday. Corie and Paul are newlyweds moving into their first apartment near Washington Square Park (ah, to be young in the '60s and able to afford a sweet studio apartment in the West Village). Unfortunately over the course of various comical mishaps—busted radiator, broken skylight, eccentric neighbor—they start to worry that their passion for each other may not be enough to keep them together. If you've ever been in a new relationship, or if you've ever had to scale five flights or more in a New York city walk up, this movie will totally charm you.

Other movie events this weekend include a screening of Darren Aronofsky's first film about mathematics, Hasidics and madness, Pi at MoMA as a part of their Automatic Update exhibition which looks back on the art world hype surrounding "new media." Or if you missed Daft Punk's legendary performance a few weeks ago in Brooklyn, you can get a taste for their unique antics in their film from last year, Electroma, which plays at the Sunshine Theater on Friday and Saturday nights at midnight. Also, get a double dose of the mysterious and sexy magic cast by the actresses Greta Garbo and Marlene Dietrich at the Symphony Space on Saturday; they'll be showing The Devil is a Woman and Conquest at 6 pm and 7:30 pm respectively. Only $11 gets you into both films.

An advance ticket note: you can now purchase tickets online for the limited run of Todd Haynes' Bob Dylan movie I'm Not There which was featured in the Times this week and is playing the Film Forum at the end of November (it'll also be shown at the New York Film Festival).