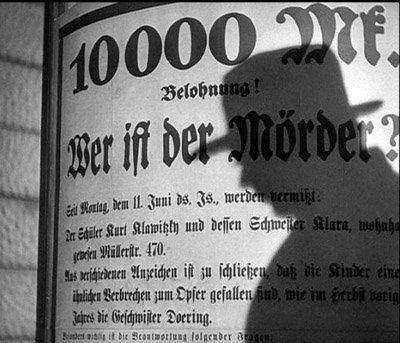 Fritz Lang: King of Noir
Museum of the Moving Image, through Sept. 30

With his fascination with psychologically shady characters and a visual aesthetic that's equally as shadowy, it's no surprise that when German director Fritz Lang came to the United States during World War II he became a major practitioner of that very American genre, film noir. The Museum of the Moving Image in Queens is devoting a whole month of screenings to Lang's work in this narrative style starting this weekend. They are kicking off the series with a bang by showing the classics M on Saturday at 3 pm and one part of his Dr. Mabuse trilogy, The Testament of Dr. Mabuse on Sunday at 3 pm.

M stars the deliciously creepy Peter Lorre as the serial killer Hans Beckert who begs to be caught and becomes a kind of tragic hero as he's brought to justice in Berlin. This was Lang's first film which used sound, and like many of his other movies, the excellent script was written by Lang's wife, Thea von Harbou. The lush shadows and the use of black and white contrast in the photography is totally stunning. Dr. Mabuse is the second installment in Lang's films about the evil villain Mabuse who terrorizes, hypnotizes and murders and features the same detective character Lohmann as in M. This film was banned by the Nazis, and some believe that provoked Lang to flee Germany for Paris. Even though the Criterion Collection has released excellent versions of these movies on DVD, just to see in M that ominous balloon given to one of the child victims floating away projected up on the big screen is well worth it.

Other film events happening around town this weekend include a selection of films at BAM which premiered at this year's NewFest, a series devoted to the Hollywood studio system director Ruoben Mamoulian starts at Film Forum, at MoMA a collection of films looking back at the Asian silent film actor, Sessue (The Cheat) Hayakawa's career and at Pioneer Theater screenings of the new cinema verité documentary by Chicago director Daniel Kraus called Musician about jazz reed player Ken Vandermark. Vandermark will be playing a solo set before each show.

Also of note, the New York Film Festival tickets for non-Film Society members go on sale on Sunday at 10 am from the Frederick P. Rose Hall box office at Broadway at 60th Street. Purchase of tickets online through filmlinc.org will be available on Monday.