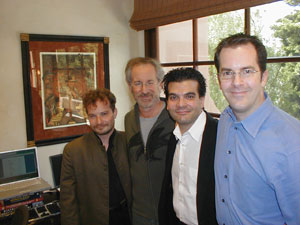 Raiders of the Lost Ark: The Adaptation
(directed by Eric Zala)

It may be hard to imagine what hardcore movie fans did before the advent of the Internet's forums, blogs and YouTube videos, but you can take a trip down the Betamax memory lane with Raiders of the Lost Ark: The Adaptation playing tonight and tomorrow at 8 pm at Anthology Film Archives. A group of preteens in Mississippi over the course of seven years constructed a shot by shot remake of the first Indiana Jones movie. Despite it's very DIY aesthetic—a pet puppy stands in for the evil Nazi monkey, the actors change physically from scene to scene—the kids, Chris Strompolos, Eric Zala, and Jayson Lamb, crafted a very entertaining and ingenious 100 minutes. (For more from them, check out this interview on the fan site TheRaiders.net from 2005 and Ed Halter on the project in this week's Village Voice.)

Since 2003 when it screened for an audience in Austin, it's been circulating around to independent repertory theaters around the country. (We caught a raucous screening of it two years ago at Seattle's Northwest Film Forum.) In fact, the film has generated such a cult following that Scott Rudin optioned the rights to the filmmakers' experience making their homage and is turning it into a movie with the script by Dan Clowes. As Harrison & Co work on installment number four of the franchise, now is a great time to look back with nostalgia at a relic of childhood fascination with the original.

Other upcoming movie events around town include a special screening and Q&A with Don Cheadle on his latest, Talk to Me, at the Film Society next Tuesday, a showing of the 1928 movies Steamboat Willie (aka Mickey Mouse's screen debut) and the Buster Keaton movie it parodies, Steamboat Bill, Jr. complete with live musical accompaniment on Saturday at 4:30 pm at MoMA and two rare films by English provocateur Peter Greenaway, A Zed and Two Noughts and The Draughtsman's Contract, at IFC Center.