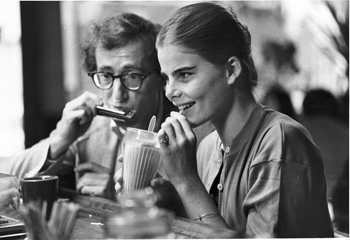 Following the overwhelming success of the Woody Allen series at Film Forum last winter, they've brought back the new 35mm print of the Woodman's classic ode to our great city for a one week run. Sitting back in the air conditioned dark, feeling the George Gershwin soundtrack and the stunning black and white photography wash over you, you'll fall for this metropolis and this movie all over again. As Allen's character Isaac Davies narrates at the beginning of the film, "New York was his town and it always would be" and Allen's love for the city is truly palpable in this movie about a divorced writer with a very young girlfriend Tracy (Muriel Hemingway) who falls for the mistress (Diane Keaton) of his married friend Yale (Michael Murphy). Rewatching this gorgeous print last year, so many wonderful details stood out. The tiny yapping dachshund dog that Keaton's Mary is walking during their first impromptu date. How bohemian a dinner party for two couples at Elaine's seems. The picture card perfect romantic settings of the park overlooking Brooklyn Bridge, Central Park's lake and the Rose Planetarium for Mary and Isaac's rendezvous—these shots are the penultimate propaganda for New York City living. How utterly, over-the-moon gorgeous young Meryl Streep is playing Isaac's newly lesbian ex-wife. Get a load of that sheet of platinum blond hair. And most shocking of all: this time around we realized Isaac should have ended up with Tracy! Previously, we'd always rooted for Mary but on further reflection we realized Tracy's jail bait but she's perfect for Isaac. Watching a movie like this on the big screen at various times throughout your life is really worth doing. Like all important art, it becomes a internal touchstone and later, just recalling its powers, can make you happy.

Other movie related activities of note this weekend include the semi-regular midnight Buffy The Vampire Slayer singalong at the IFC Center on Friday and Saturday, a special premiere screening with director Q&A of Patrick Tam's After This Our Exile at the Film Society on Saturday at 8:15 pm, and a midnight screening of Jane Fonda's Barbarella at the Landmark Sunshine theater on Friday and Saturday nights.