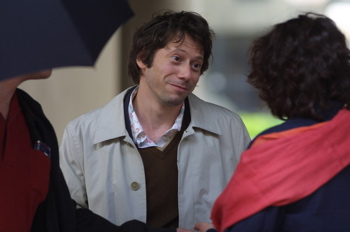 Arnaud Desplechin in Focus
Museum of the Moving Image

When Gothamist saw cinematographer-turned-director Arnaud Desplechin's film Kings and Queen two years ago, we knew we were watching something unique. His movie about a French woman and the three important men in her life—her adorable son, her crazy ex-husband and her dying father—unfolds so organically you get completely caught up in the complex characters, utterly forgetting that Desplechin is expertly telling his story in a very particular way. Now the Museum of the Moving Image has invited Desplechin to participate in a mini-retrospective of his work, showing four of his films with four rare films by Ingmar Bergman, John Cassavetes, Alain Resnais, and François Truffaut this weekend and next.

You can see the wonderful Kings and Queen (pictured), which indieWire and the French Syndicate of Film Critics named best film, next Saturday and listen to Cahiers du Cinema editor-in-chief Jean-Michel Frodon moderate a discussion with Desplechin after the screening. (By the way, that eminent French film journal has recently launched an English version of their website, if you're in a mood to geek out on their excellent criticism.) This weekend get familiar with some of the director's earlier works like his English language feature Esther Kahn from 2000, which stars Summer Phoenix and Ian Holm or My Sex Life…or How I Got Into an Argument about a love-lorn professor coping with office politics and also stars Mathieu Amalric from Kings.

Other movie events happening this weekend include screenings of the Russian classic Cranes Are Flying at BAM Cinematek as a part of their series The Emotional Camera: Mikhail Kalatozov, new French experimental videos curated by the Centre Pompidou in Paris will be playing at the French Film Institute on Friday and Saturday and see more avant-garde work that coincides with the New York Film Festival's programming at Anthology Film Archives in their program Walking Picture Palace.