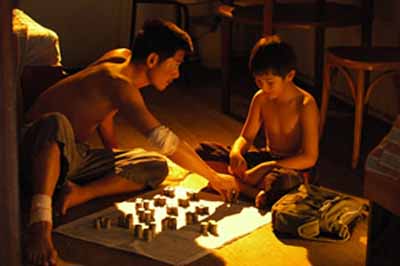 Founded in the '70s by Asian American activists wanting to capture with hand held VHS cameras the lives of their Chinatown neighbors, Asian Cinevision celebrates the 30th birthday this year of their annual Asian American International Film Festival. Held at the Asia Society (on Park Avenue and 70th Street), the AAIFF features quite a bit of notable and intriguing programming over the next two weeks. Last night the festivities kicked off with a New York premiere of Finishing the Game, a new movie by Justin Lin (Better Luck Tomorrow) about the search for a suitable stand-in for Bruce Lee after the martial arts icon died on the set of his final film. The movie doesn't get a wide theatrical release until October but tonight at 6 pm you can catch a special Q&A with Lin regarding the continuing growth of Asian Americans in Hollywood moderated by Angry Asian Man blogger, Phil Yu.

The fest also features a very cool sidebar devoted to Patrick Tam, a Hong Kong director who came up in their booming movie industry during the '80s along with Tsui Hark and Ann Hui. Tonight at 6:30 pm, there's a screening of Tam's first film in 17 years called After This Our Exile about a complex father/son relationship. It swept the Hong Kong Film Awards this last year and we've heard great things from our Asian cinema sources, so be sure to check this one out. Also on our "to see" list is the center piece feature Dark Matter about a Chinese Ph.D. candidate studying in the U.S. on Thurs., July 26 and the closing night movie Never Forever starring Vera Farmiga in a tumultuous interracial marriage which plays next Sat. night. With all of these features, plus the short films and AAIFF's annual 72 Hour Shoot Out (shorts made by 10 finalists in only 3 days), it's going to be a jam-packed screening schedule of Asian American films.

Other movie events happening around town include a special one week run of Fritz Lang's futuristic dystopian masterpiece Metropolis in a new 35 mm print at Film Forum, a recently restored print of D.W. Griffith's Way Down East tonight at 7 pm at the Film Society and the New York theatrical premiere at Anthology Film Archives of Linas Phillips's homage to Rescue Dawn director Werner Herzog, Walking to Werner.

Production Still from Patrick Tam's After This Our Exile.