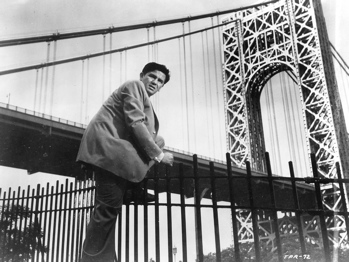 Every now and then living in this teeming modern city, we get a glimpse down a side street or inside a dilapidated old joint and can see "what was." Starting tonight a five week series devoted to New York City Noir at Film Forum is also looking backward through New York's movie history to a time when women were dames, men were gumshoes and everything on the mean streets just seemed grittier. In addition there will be a Mondays sidebar featuring silent films set in the five boroughs which will be accompanied by live piano music performed by Steve Sterner.

It's a real embarrassment of riches in this series since the programmers have expanded the concept of "noir" beyond just the post-War period to include thrillers from the '50s and the '70s. Be sure to take advantage of some of the double features in the series, there's some pretty great pairings and you get more movie bang for your buck. For instance the Martin Scorsese double whammy of Mean Streets and Taxi Driver (Aug. 12 & 13) as well as the Alfred Hitchcock two-fer of Rear Window with Rope and then Rear Window with The Wrong Man (Aug 24 - 27) should be wonderful. Also, the chance to see The Warriors and Superfly together (Aug. 17 & 18) doesn't come along too often. As for the opening weekend's line-up, don't miss Sweet Smell of Success, a deliciously dirty tale about muckraking journalists and sleazy publicists trying to get ahead that totally predicts our current cultural climate. It has gorgeous black and white cinematography and stars Burt Lancaster and Tony Curtis.

Other upcoming movie events include a mini-series devoted to Roman Polanski starting next Monday at the Film Society which includes the Apartment Trilogy: Repulsion, Rosemary's Baby and The Tenant, and the annual Scanners festival devoted to digital media starts today at the Walter Reade Theater. In addition to the Noir series, Film Forum is screening a new Iraq documentary No End in Sight starting this weekend and the director Charles Ferguson will be on hand for a Q&A following Friday and Saturday's 8 pm screenings.