The Cinecultist's Weekly Repertory Pick: Bump in the Night Edition 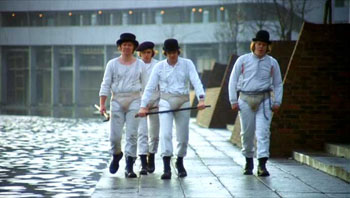 It's Only A Movie: Horror Films From the 1970s and Today
Museum of the Moving Image, Queens

Boo! It's time to hide your eyes and scream with delight over at the Museum of the Moving Image, as they'll be showing six weeks worth of old and new horror films starting tonight. You could say that scary stories are always about what metaphorical bogey men society fears most, but that became particularly evident in the horror films made during the '70s.

In a panel discussion on Sunday at 4:30 pm, horror aficionados Nathan Lee (The Village Voice), Adam Lowenstein (author of Shocking Representation: Historical Trauma, National Cinema, and the Modern Horror Film), Maitland McDonagh (author of Filmmaking on the Fringe: The Good, the Bad, and the Deviant Directors), and Joshua Rothkopf (Time Out New York) will be discussing with assistant curator Livia Bloom some of the most prevalent themes and preoccupations during that period. In addition this weekend they'll be screening such creepy favorites as Stanley Kubrick's A Clockwork Orange (Sat. at 4 pm), Rob Zombie's The Devil's Rejects (Sun. at 6:30 pm), The Texas Chain Saw Massacre (Sun. at 2 pm) and Saw II (Sat. at 6:30 pm). It's not often that you can see such a wide range of horror movies put side by side, so be sure to take advantage of this well-programmed series. You never know what movie insights might come up from seeing Carrie (July 21 at 2 pm) and Ichi the Killer (July 15 at 4 pm) in close proximity.

Other notable movie events happening this weekend include the kick off today of the 18th Human Right Film Festival at Lincoln Center, a short series devoted to landscape filmmaker James Benning at Anthology Film Archives, and tasty documentaries at the first annual Food Film Festival at the Water Taxi Beach. Also, a reminder that the first Bryant Park outdoor movie of the season is this coming Monday night and it's the very New York-centric break-up story Annie Hall.