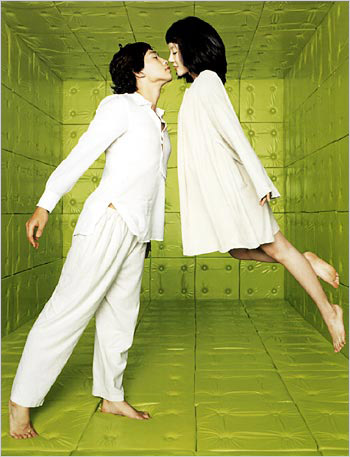 Grady Hendrix and the Subway Cinema crew know a thing or two about Asian cinema. Actually, that's a serious understatement. Every year these film fanatics cull the international market in search of Far East movie gems, often films without U.S. distribution, to show to an eager and enthusiastic New York audience. This year the fest moves to the IFC Center in the West Village and then the Asia Society on the Upper East for two great weeks worth of 30 new features from Korea, Japan, Hong Kong, China, Thailand and Pakistan. Attendees can expect high energy screenings, often accompanied by pre-screening giveaways and hilarious introductions from the Subway Cinema staff. Every year the festival bestows an Audience Award on the crowd favorite, and last year's winner Taste of Tea from Japan was one of our most beloved movies of the year.

Check out the trailer to the festival for a few choice clips of the mayhem, robots, vengeance and yodeling on tap this year. In particular we're excited for the first non-Vengeance centric flick from Korean director Park Chan-wook, the romantic comedy I'm a Cyborg But That's Okay (Sun. June 24 at 6:20 pm; Sat. June 30 at 8:15 pm), a new one from Japan's shock-master Takashi Miike Big Bang Love, Juvenile A (Thurs. June 28 at 7 pm; Thurs. July 5 at 6:45 pm) and the special 15th anniversary screening of John Woo's classic Hard Boiled (Sat. June 23 at 10:30 pm). If you've never seen Chow Yun-fat weilding the double barrels, you are in for a serious treat.

Other movie events around town this weekend include a Q&A with director Jennifer Baichwal after tonight's 6:20 pm screening of her movie about landscape photographer Edward Burtynsky, Manufactured Landscapes which is now playing at Film Forum, a special free (with a $7 drink minimum) screening of Michael Haneke's provocative movie from '05 Caché at The Rubin Art Museum tonight at 9:30 pm, and two selections from the MoMA series devoted to actor John Wayne and the 100th anniversary of his birth, The Searchers and She Wore A Yellow Ribbon.

[Pictured: A still from I'm a Cyborg But That's Okay playing at this year's NYAFF.]