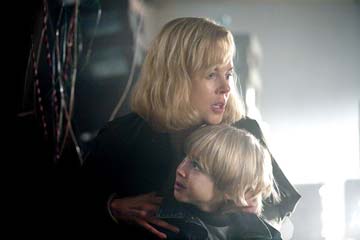 The Invasion
(directed by Oliver Hirschbiegel)

Stylish, political, visually arresting and darn right freaky, The Invasion is a horror movie that taps into what really horrifies us today—namely that the people in our lives could turn into personality-less automatons influenced by some evil alien virus. It may sound like a totally fantastical premise, but in the context of the movie it really works. Nicole Kidman and Daniel Craig star in this remake of Invasion of the Body Snatchers, as two D.C. doctors who start to realize the mysterious flu infecting everyone may be more sinister than it seems. Jump cuts hurtle the audience through the nail-biting action sequences, as Kidman races around the nation's capital trying to locate her young son. (FYI: The Wachowski brothers did some uncredited reshoots.) At times wispy and then bad ass mama, Kidman delivers one of her best performances in ages. This trend of horror films which deal with a government's lack of, or even a nefarious, self-serving reaction to a public health crisis (see also the Korean monster movie The Host) is so topical and almost plausible it may give you nightmares. Who's the boogie men of 2007? Glass faced yuppies and the CDC.

A very honorable mention for Weekly Pick goes Superbad (directed by Greg Mottola) because the hype is all true: it is a hysterical movie. Though with a script written by Seth Rogan (Knocked Up), produced by Judd Apatow, and starring Michael Cera from Arrested Development and Jonah Hill, it'd be tough for it not to be. Chock-a-block with cringe-inducing awkward teenage scenarios and raunchy yet honest dialogue, Superbad is one of the few teensploitation movies that actually seems to remember what it was like to be a teenager.

Other new films hitting theaters this week include Colin Firth and Bollywood star Aishwarya Rai's Roman epic The Last Legion, the English farce Death at a Funeral, and three different documentaries: Leo DiCaprio's environmentalist screed The 11th Hour, a look at Donkey Kong fanaticism in The King of Kong, and the Sundance fav Manda Bala about corruption in Brazil.