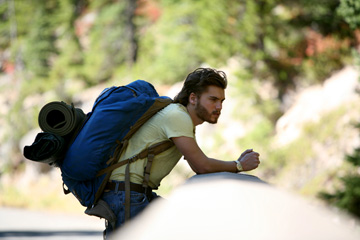 Into the Wild
(directed by Sean Penn)

Chris McCandless wanted to utterly divorce himself from civilization. He gave away all of his money, abandoned his car, changed his name and cut off all ties with his family. Adventure journalist Jon Krakauer wrote a very moving account of the young man's experiences tramping around the United States for two years and then spending four months living in an abandoned bus in the Alaskan wilds before dying of starvation in his book, Into the Wild. Now writer/director Sean Penn has brought McCandless's story to the big screen in a powerful and haunting film starring Emile Hirsch which comes out this week.

Hirsch is a young actor who has seemed like he was on the brink of something big for a few years now and this role as the idealistic and obstinate Chris/Alex, or Alexander Supertramp as he dubs himself, should really put him into the spotlight. The rest of the cast is really top notch too, from Catherine Keener as a fellow drifter Alex meets on the road to William Hurt and Marcia Gay Harden as Alex's bourgeois parents. (Their middle class, early '90s look is so spot on.) Jena Malone is also really wonderful as Alex's sister, though the bulk of her role is in voice over, as she describes her brothers personality and what she thinks led to his decision to go to Alaska. For fans of the Krakauer book, it's interesting to see how Penn adapted this very descriptive, personal story with little dialog into his script. He's also filled the movie with some utterly breath taking footage of the American landscape. The wide open spaces where Alex rambles will make your tiny New York apartment seem particularly puny. Although when Alex discovers that he's trapped on his bluff after an unexpected swelling of the creek, you may be glad for our city crowds. Hirsch lost a considerable amount of weight to depict the final days of Alex's life, and while that part of the movie is shocking (and surely will be discussed in articles about Hirsch's performance), the really powerful stuff he does on screen has more to do with his expression of Alex's tortured inner life than his dwindling waist size.

Other new films coming to theaters this weekend include Jessica Alba and Dane Cook's klutz komedy Good Luck Chuck, a new teen movie with Amanda Bynes called Sydney White based on the Snow White story, the third installment in the video game adaptation with Milla Jovovich Resident Evil: Apocalypse, Brad Pitt and Casey Affleck's Western The Assasination of Jesse James by the Coward Robert Ford, another popular chick novel translated to the big screen The Jane Austen Book Club and the well-reviewed eco-horror The Last Winter.