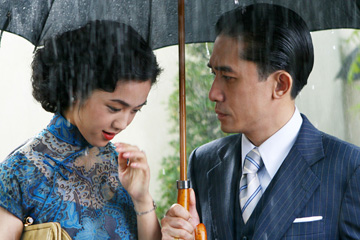 For fans of Hong Kong cinema, it's a bit of a surprise that a wonderfully expressive and nuanced actor like Tony Leung hadn't worked before with the Oscar-winning, Taiwanese turned New Yorker director Ang Lee. But the two artists have been united now in Lee's new thriller set in World War II Shanghai, Lust, Caution which comes out this weekend.

An erotically charged film with such explicit scenes that it garnered the dreaded NC-17 rating (and thus makes it more difficult to get it wide distribution), Lee continues to push the onscreen sex boundaries he flirted with in Brokeback Mountain. Student activist Wong Chia Chi (first time actress Tang Wei) seduces the Chinese official Mr. Yee (Leung) in order to bring about his political demise, but their buttoned up society and the fraught terror of the war keeps much of their passion in disguise. While some critics are finding the two and a half hour running time of Lee's movie excessive, others are arguing that "rest of the film is absorbing" and the performances strong. Besides, spending that much time gazing at Leung's face in the dark can't all be a waste.

Other new movies coming to theaters this weekend include Greg Kinnear and Morgan Freeman's lovelorn drama Feast of Love, a Peter Berg thriller set in Saudia Arabia The Kingdom, The Rock's smells what's cookin' (in the Easy Bake Oven) in the kiddie flick The Game Plan, a drama about sex slavery Trade and Wes Anderson's newest set in India aboard a local train The Darjeeling Limited.