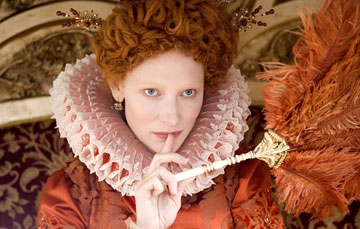 Ever since she dazzled audiences in 1998 with her portrayal of Queen Elizabeth I, it's been hard not to think there's something naturally regal about actress Cate Blanchett. Now Blanchett has returned to her Oscar-nominated role in a sequel Elizabeth: The Golden Age with the same director and a similar cast. But will lightening strike twice?

Maybe the expectation level was too high, but while Elizabeth the second does have stunning photography and stand out performances, it doesn't quite offer the thrill of the original. In this installment the Queen has two major foes: the Catholic Spanish with their massive armada and her treacherous half sister Queen Mary of Scots. Taking smaller parts and making them stand out are the always wonderful Samantha Morton playing Mary with a sinister Scottish brogue and fiery eyes and the excessively dashing Clive Owen as Sir Walter Raleigh, an adventurer vying for the Queen's affection. Despite E2's less compelling plot, it's still worth seeing for Blanchett's throne-worthy performance.

Other new movies coming out this weekend include Mark Wahlberg and Joaquin Phoenix's brothers in crime drama We Own the Night, the Joy Division biopic Control directed by Anton Corbijn, Jude Law and Michael Caine's pas de deux Sleuth, the dark comedy Lars and the Real Girl starring Ryan Gosling, and a new one from Tyler Perry's Why Did I Get Married?.