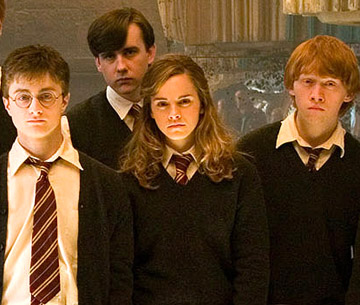 In a funny reversal of the "movie's more important than the book" paradigm, the excitement surrounding the release of the fifth Harry Potter movie on Wednesday was but a preview to the real midnight mania next Friday. While the movies in this children's books franchise have been popular, they could almost be seen as publicity tools for the books, psyching up fans for the next 10 pound tome to hit bookstores. Order of the Phoenix adds fuel to the die-hard fan's flames but as a stand alone movie it's not nearly as artistically complex as some of the earlier movies, like Alfonso Cuaron's lovely Prisoner of Azkaban.

This installment opens with a Dementor attack on Harry and his fat, blinged out cousin. Harry's life-saving magic in front of a Muggle lands him in front of the wizarding council intent upon expelling him from Hogwarts. Even though Harry says he saw the return of Lord Voldemort, the Minister of Magic and his cronies don't want to believe the Dark Lord has come back and book five follows their gradual realization, as the Death Eaters and the Order of the Phoenix build their ranks. The Minister also installs a new Professor of the Dark Arts at Hogwart's, the very fussy Dolores Umbridge played wonderfully tight-lipped and constantly decked out in pink by Imelda Staunton. Everything about this women reeks of hypocrisies and repression, even the creepy cat plates in her office. To try to get around Umbridges increasingly more strict school policies, Harry and his friends start a secret society called Dumbledore's Army where they practice defensive spells to fight dark wizards. These Rocky-esque scenes of the kids learning magic are some of the most fun in the film, as is the growing romance between Harry and fellow DA member Cho Chang. In this installment the actors seems to have taken aging pills, looking a good two years more mature than the last time we saw them on screen. Unfortunately these entertaining bits are mere placeholders meant to keep us engaged in the series. There seems to be far too much material (896 pages worth!) director David Yates needs to get up on screen for him to bother with real thematic development. While it's a fun movie for fans who've already pre-ordered their copy of Deathly Hallows, it's not really for newcomers to the franchise.

Other flicks coming this weekend to a theater near you include Don Cheadle as a talk show host in Talk to Me, Steve Buscemi's directing a remake of the incendiary filmmaker Theo Van Gogh's movie, Interview, the schlocky shock-fest Captivity and the French comedy with Daniel Auteuil My Best Friend.