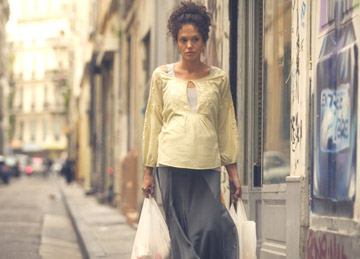 If you ever turn on the TV, your computer or glance at a newspaper, you're probably aware that mother/humanitarian/human clothes hanger Angelina Jolie has a new movie coming out this weekend. You've also probably gathered that it's produced by her hunky paramour and co-parent Brad Pitt and that it highlights Angie's "good person-ness" by having her depict the tragic life of journalist Mariane Pearl shortly after the kidnapping of her husband, fellow journalist Daniel Pearl, in Pakistan in 2002. All of this is true, but if we can just set all of those paparazzi-fueled, Ann Curry/Dateline interview-hyped details aside, A Mighty Heart is a remarkable movie in its own right. The best thing it has going for it isn't its international superstar but rather the under-stated director, Michael Winterbottom. An incredibly prolific filmmaker, Winterbottom works in a range of genres from literary adaptations and character-driven dramas to political action stories about current events and futuristic love stories. A director who can make both the cheeky 24 Hour Party People about British pop music, and the moving In This World about Afghan refugees—both in the same year, no less—is really quite something.

In a way, A Mighty Heart is better understood not as an Angelina movie but as a companion piece to Winterbottom's quasi-documentary from last year, A Road to Guantanamo. That movie follows the Tipton Three, a group of young Englishmen who while on vacation in Pakistan and Afghanistan during 2001 are rounded up as supposed enemy combatants, and were then sent to the American island prison where they were held without trial for over two years. In A Mighty Heart we see an alternate side of life among terrorists in Pakistan, as Daniel Pearl (Dan Futterman) tries to get an interview with a local big wig and is brutally killed by a group affiliated with Al Qaeda. Winterbottom's camera brilliantly captures Pakistani street life, as the characters travel around Karachi trying to track down Daniel before its too late. Their city life is outwardly quite different from New York, but the palatable energy is stunning and obviously very relatable. As for Jolie, her depiction of the stoic Mariane is both moving and distracting, particularly her fake looking curly wig designed to evoke her AfroCuban and Dutch heritage. However despite our Jolie misgivings, we have to admit that the scene where Mariane finally learns what's happened to her husband and her subsequent reaction made us break down into tears. We expect to see it again, as Jolie's Oscar clip, in about eight months time.

Other new releases this week include Steve Carell's Biblical send-up Evan Almighty, John Cusack freaking out in a spooky hotel in 1408 and Sir Ben Kingsley as a comedic, alcoholic Polish hit man in You Kill Me.