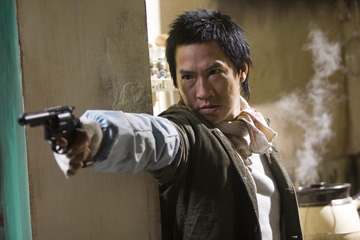 Exiled
(directed by Johnnie To)

Over the long weekend you could go for something at the movie theater that's mindless and features ping pong balls, but why not stretch your comfort zone instead to take on a stylish and provocative foreign film? Kickin' ass, takin' names and commenting on the lingering legacy of Imperialism and the hand off of Hong Kong to the Chinese—there's not a lot of movies that would take such complex agenda on but then again not all movies can be a Johnnie To movie. As one of the elder statesmen in Hong Kong cinema, To continues to stretch the limits of the gangster genre, like last year with the festival favorite Triad Election. In his newest, Exiled, he's combined many familiar conventions from American Westerns (an outlaw brotherhood, gun totting prowess and a final saloon shoot out) with the Triad gangster genre (warring clans, baroque political maneuvering and sneaky money deals).

A former gangster Wo and his wife and new baby return to Macau to build a new life together but are met by his buddies sent to kill him by his former boss. In a moment of weakness, the gangsters decide, out of former loyalties, to give him a few days to build up a store of money to support his family after he's gone. But as the group of friends get in deeper into the Macau underworld, with the warring bosses and the police turning a blind eye, they realize just one quick score won't be enough. They'll have to go for that heavily armed, store of gold on Buddha Mountain. From the balletic opening shoot out in the young couple's apartment to the final double cross in the whorehouse, Exiled is a riveting piece of movie making. Just the thing for those end of the summer blues.

Other new releases this week include Kevin Bacon's revenge drama Death Sentence, the next installment of the holiday horror franchise Halloween, a silly sports comedy about table tennis Balls of Fury and the intersecting drama The Nines.