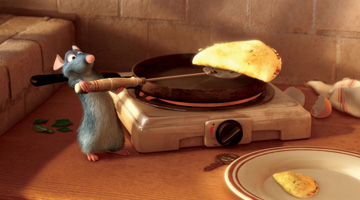 For fans of animated movies, the work produced by the Pixar studio hold a prominent place in our hearts. Pixar and their often rocky involvement with the Disney Company was back in the news a year and a half ago, when Disney (who had previously released a number of Pixar projects like Toy Story, Monsters Inc and The Incredibles) purchased Pixar to the tune of $7.4 billion in stock and installed Pixar's Ed Catmull and John Lasseter within Disney. Pixar fanatics feverishly wondered how this move might affect the previously prodigious creative output from San Francisco but with the release of Ratatouille this weekend, those Cassandra-fears will be allayed. Written and directed by the brains behind The Incredibles and The Iron Giant, Ratatouille is like all the best that Pixar has to offer: a beautifully composed, cleverly characterized complete universe on screen. A joy to watch for adults and children, Ratatouille transcends the usual "animation is for kids" paradigm and delivers a really excellent film about the love of good food and the magic of Paris.

Patton Oswald is the voice of our young hero Remy, a French rat who has such a refined palate he eschews the garbage feasted on by his clan for fine cuisine made by humans. A forced flight from their countryside home separates Remy from the rest of his colony and through sheer luck he ends up in the kitchen of a once-great city restaurant where he befriends and begins to mentor the kitchen boy, Linguini. These scenes in the kitchen imagined from a rat's eye view are really spectacular, as Remy practically dances around the pots and pans making food. They come across as both fanciful and oddly realistic, as though it would really be possible for a rodent to be a fine chef. In this instance and so many others throughout the movie, Ratatouille completely immerses the viewer in its delightful world. While the sight of a furry phantom on the subway tracks still grosses out Gothamist, we're very pleased to see them featured so cunningly and lovingly on the silver screen.

Other flicks gracing theaters this week and pre-holiday weekend include the melodramatic chick flick Evening, Michael Moore's Sicko which is now in wide release, Bruce Willis's fourth installment of the action franchise Live Free or Die Hard, and Vitus about a reluctant piano prodigy.