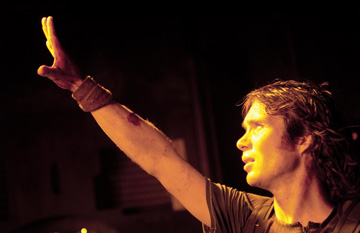 Sweltering in the humidity today it's hard to imagine being so upset about the sun going out, but that's the horrific premise in Danny Boyle's excellent new sci-fi fantasy Sunshine, which is out this weekend. The movie is set 50 or so years into the future, as the crew of the Icarus II are about to move outside of communication range on their voyage to the sun. The ship is loaded down with nuclear bombs to drop on our dying star in the hope that it will reignite and continue to sustain life on earth. However, a pall hangs over the multi-cultural crew as the first Icaraus mission mysteriously disappeared at about this distance from home.

As in Andrei Tarkovsky's Solaris, Boyle uses the plot structure of a journey into space to explore some of the odder nooks and crannies in the human psyche. Of course there are latent jealousies and neurotic tics in the crew members and as they get closer to their mission's end, everything goes a bit haywire. However, the ship's sensitive physicist Capa (Cillian Murphy) is trying desperately to hold it together since he's ultimately responsible for pushing the button to ignite the bomb. As the death count rises and disaster looms, the film's tension becomes palpable. Murphy and the rest of his cast mates such as Rose Byrne, Michelle Yeoh and Chris Evans, all give wonderful, complex performances. There's some kidding in the dialogue about sci-fi movies picking off one crew member at a time, so you know this is a film that's aware of its genre. Also the visual effects Boyle was able to muster on a relatively small $40 million budget are impressive and believable. After the runaway success of Trainspotting, Boyle almost got swallowed up by the Hollywood machine but if he continues to make smart and strong little movies like Sunshine he'll become known as true film artist.

Other movies coming to a theater near you this weekend include Adam Sandler and Kevin James going gay in I Now Pronounce You Chuck and Larry, another movie version of the hit Broadway musical based on a John Waters movie Hairspray, Milos Forman's artist tale Goya's Ghosts, and the depressed convenience store worker flick Cashback.